You may have seen the Egyptian Ankh symbol many times in your life without knowing it. We know we’ve seen it on “Courage the Cowardly Dog”, “Justice League” and “X-Men Evolution” to name a few shows.

The Ankh resembles the Christian Cross in many ways, and is worn in the same manner in necklaces.

Here is a full breakdown on the Ankh tattoo history and meaning. 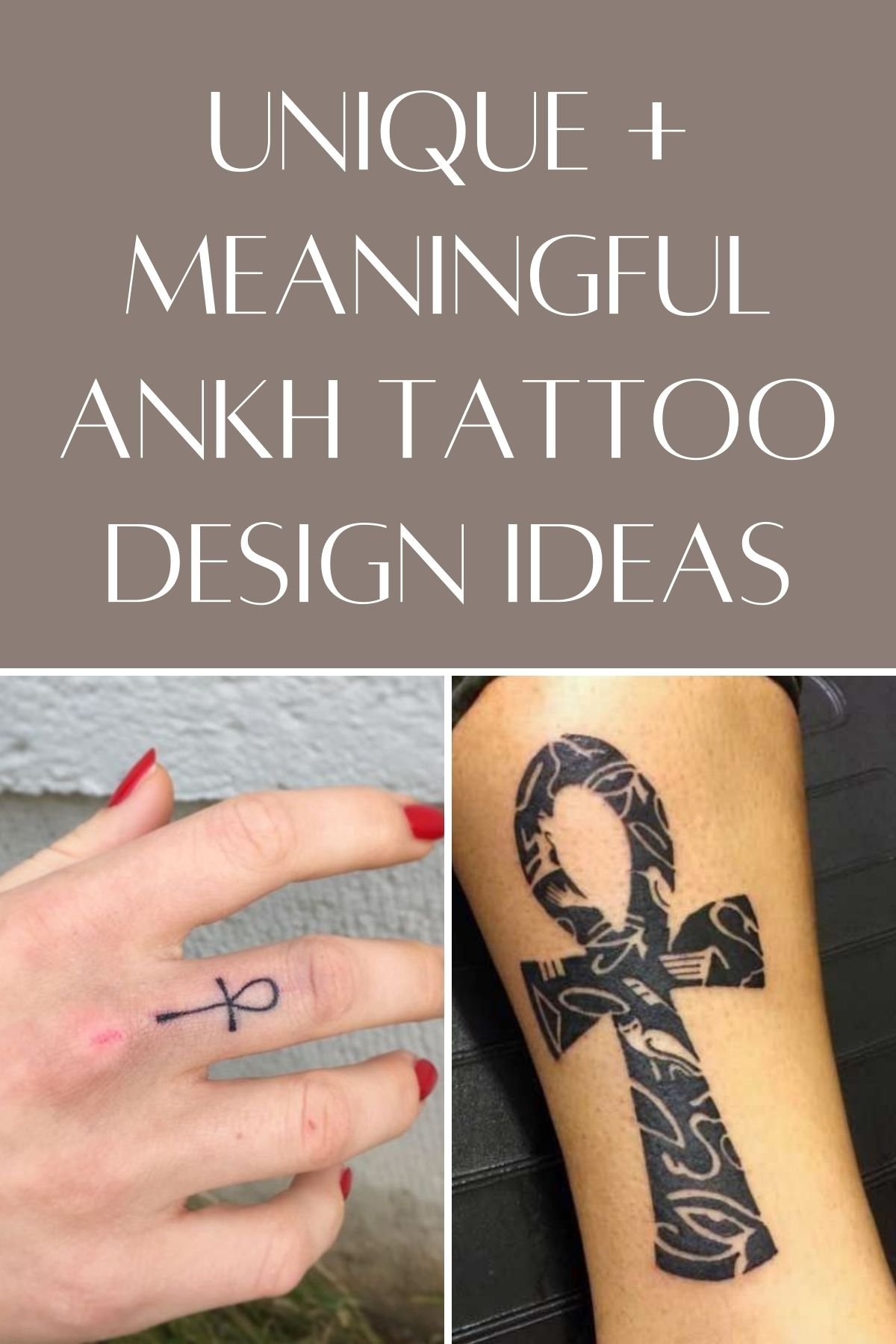 What is the Egyptian Ankh Tattoo?

The Ankh symbol has a deep meaning behind it that goes back  Millennia. It is a cross-like sign which originates from Ancient Egypt and holds cultural and religious as well as social significance.

The one meaning most commonly associated with it is “Life”. It’s used in inscriptions to convey things like “May you be healthy”, “alive”, “cause to live”, “nourish”. However, the symbol’s significance goes far beyond that. These greetings were often used to address royalty and nobility in the Empire.

The symbol was also used in the words “Mirror” and “Flower Bouqet”. It was also worn by many Egyptian Queens and Kings who adorned their bodies with it in the form of tattoos and jewelry.

It was also found in hieroglyphs within pyramids and on stone columns and pillars as well as on statues. The repeated mention of the symbol along with its conflation with gods and goddesses, means it’s very socially significant.

As for the shape of the Ankh

As for the shape of the Ankh, there is debate over its meaning. Some say it is a knot formed from cloth or reeds. However, others believe this to be false since certain depictions show its lower bars cleaved in twain, like a flexible material.

The earliest mention of the Ankh tattoo is 3000-5000 years old and comes from the First Egyptian Dynasty. There is even evidence to suggest that its origins date as far back as the Mesopotamian and Persian Civilizations.

One theory is that it was first displayed on the belt buckle of the Egyptian goddess Isis. Egyptologist Wallis Budge called it the “knot of Isis” or the “tjet”. This knot was meant to represent protection.

In various paintings, the symbol is also used to convey womanhood, motherhood, or female sexuality. For instance, in one painting, the Ankh is offered to Queen Nefertari by Hathor, the goddess of female sexuality.

Ankh and The Afterlife

The Ankh is associated with the afterlife as well. It was frequently carved on to sarcophagi for Kings and Queens. Since they were believed to be demigods or gods themselves, it was common practice.

The Ankh and the Scarab

Scarabs are symbols of transformation and change in Egyptian culture. Hence, they’re found with the Ankh many a time. Scarabs are often presented with Ankhs carved on to each wing.

There have been various types of Ankh tattoos throughout history. You can choose which one to get based on your own style or maybe to change up your style.

This is a simple, solid, black colored Ankh. This works for both small and large areas on the body. It looks very understated and sober. As far as Ankh tattoos go, this is the most common.

This color stands for fertility. It’s often paired with the Ankh to signify new life.

Dark blue stands for rebirth. It works with the Ankh’s original meaning of life.

Black is symbolic of the underworld and signifies the afterlife, death, and the circle of life.

The Royal Ankh is usually gold. It is seen on tomb paintings and royal headdresses. Symbols like scarabs and sheaves of wheat are present on these Ankhs. These can be incorporated into tattoos as well.

Celebrities with Ankh Tattoos and Jewelry

Several celebrities have worn the Ankh in various forms. These include jewelry and tattoos.

The late Amy Winehouse wore the Ankh tattoo between her shoulder blades. The artist was famous for various other tattoos on her back and arms.

Cassie Ventura also got an Ankh tattoo on the back of her neck. This one is pretty small and understated. Due to its size, it looks like the Christian cross more than the Ankh at first. However, on close inspection, it is definitely the Egyptian symbol.

Rihanna flaunted her Ankh jewelry set quite openly at her concerts. This was a pair of earrings shaped like Ankhs as well as a necklace made with repeating Ankh designs. Jewelry like this was not uncommon in Ancient Egypt.

Beyonce also showed off her Ankh gold necklace in the music video for her song “Lemonade”.

While the Ankh may be centuries old, it’s a very significant symbol that people wear proudly to this day.

Hence, it’s a great choice for a tattoo.

Choosing an ankh as a design or a part of a larger piece adds a touch of history, as well as deep meaning to your tattoo.

3. Small Back of Neck Tattoo 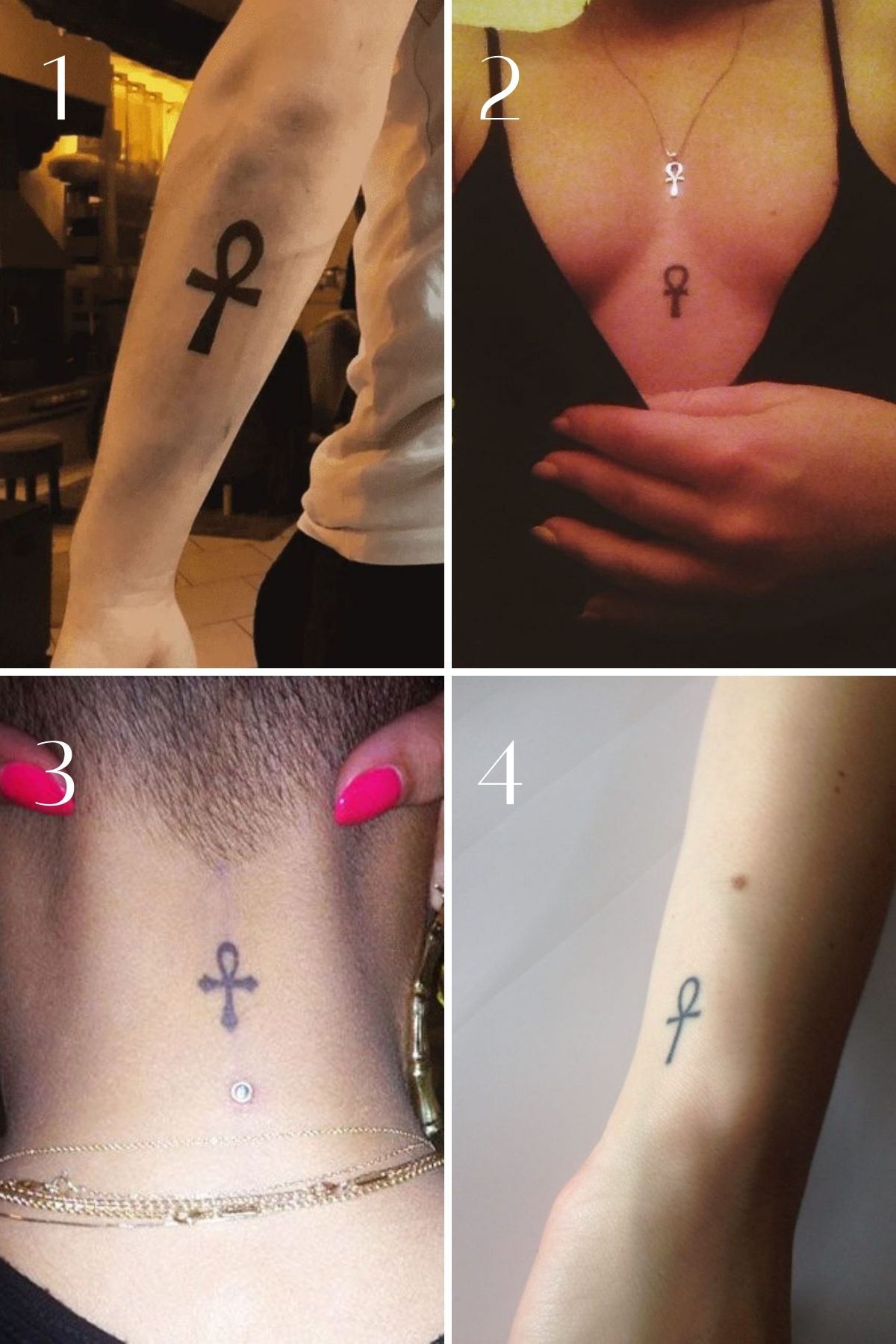 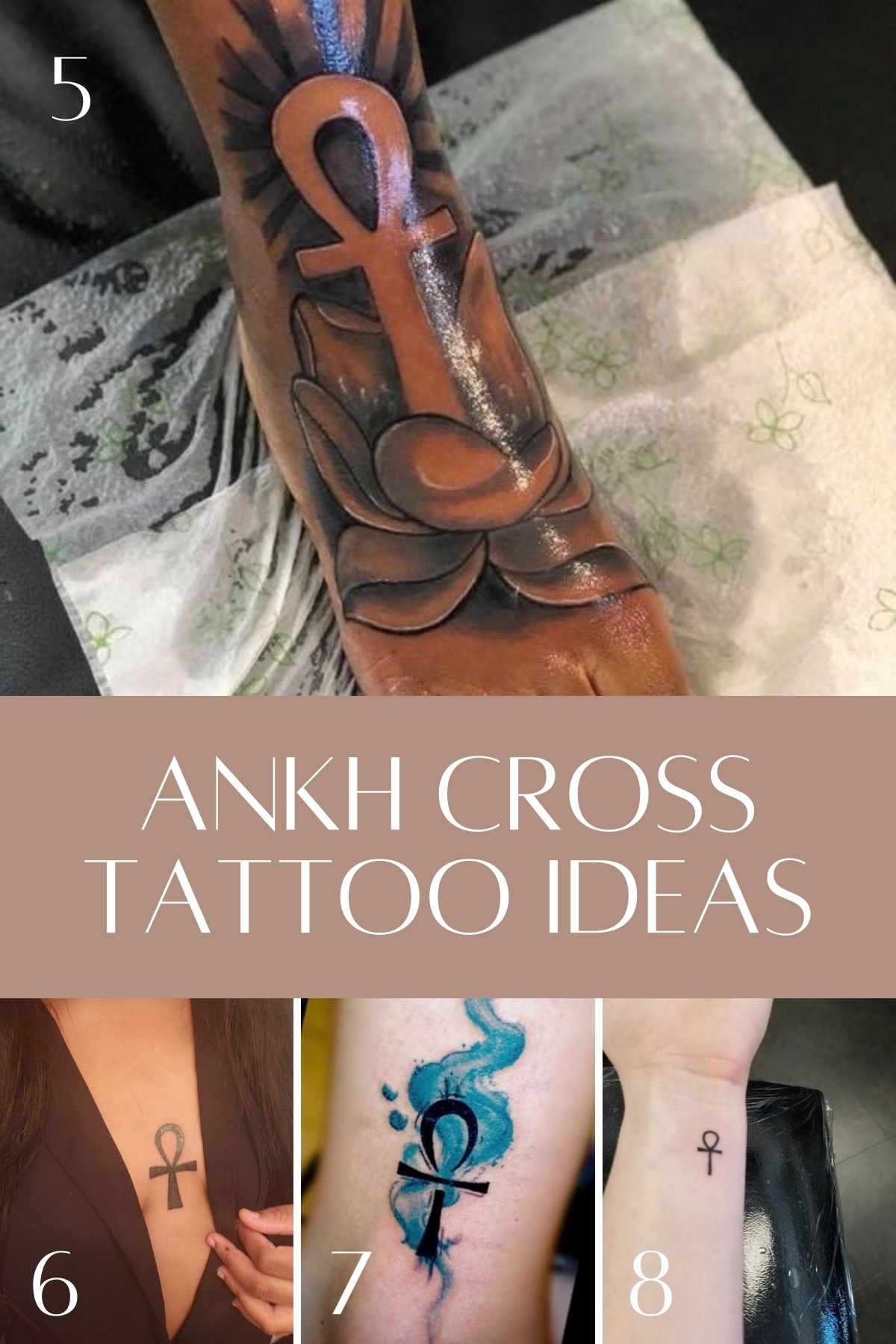 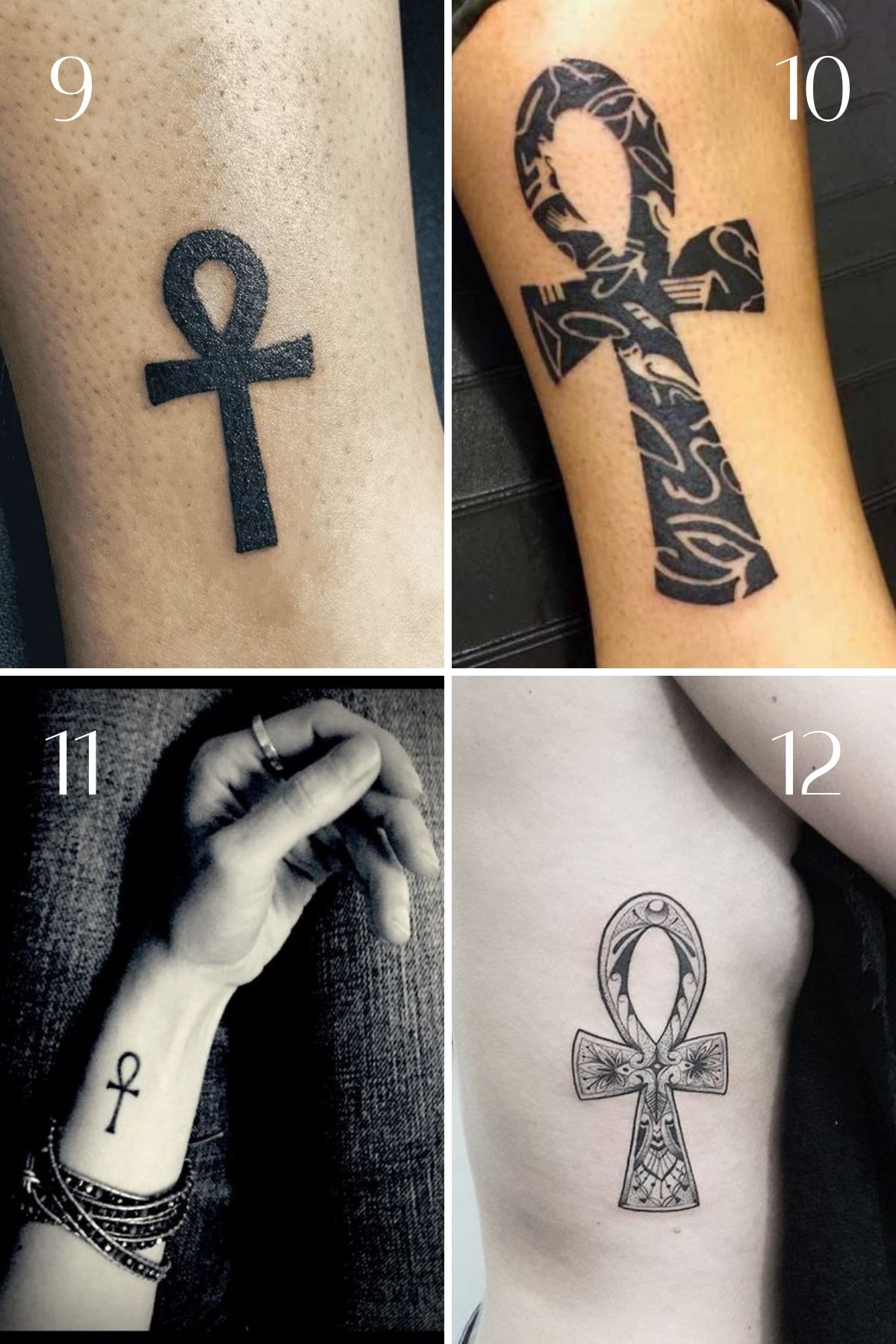 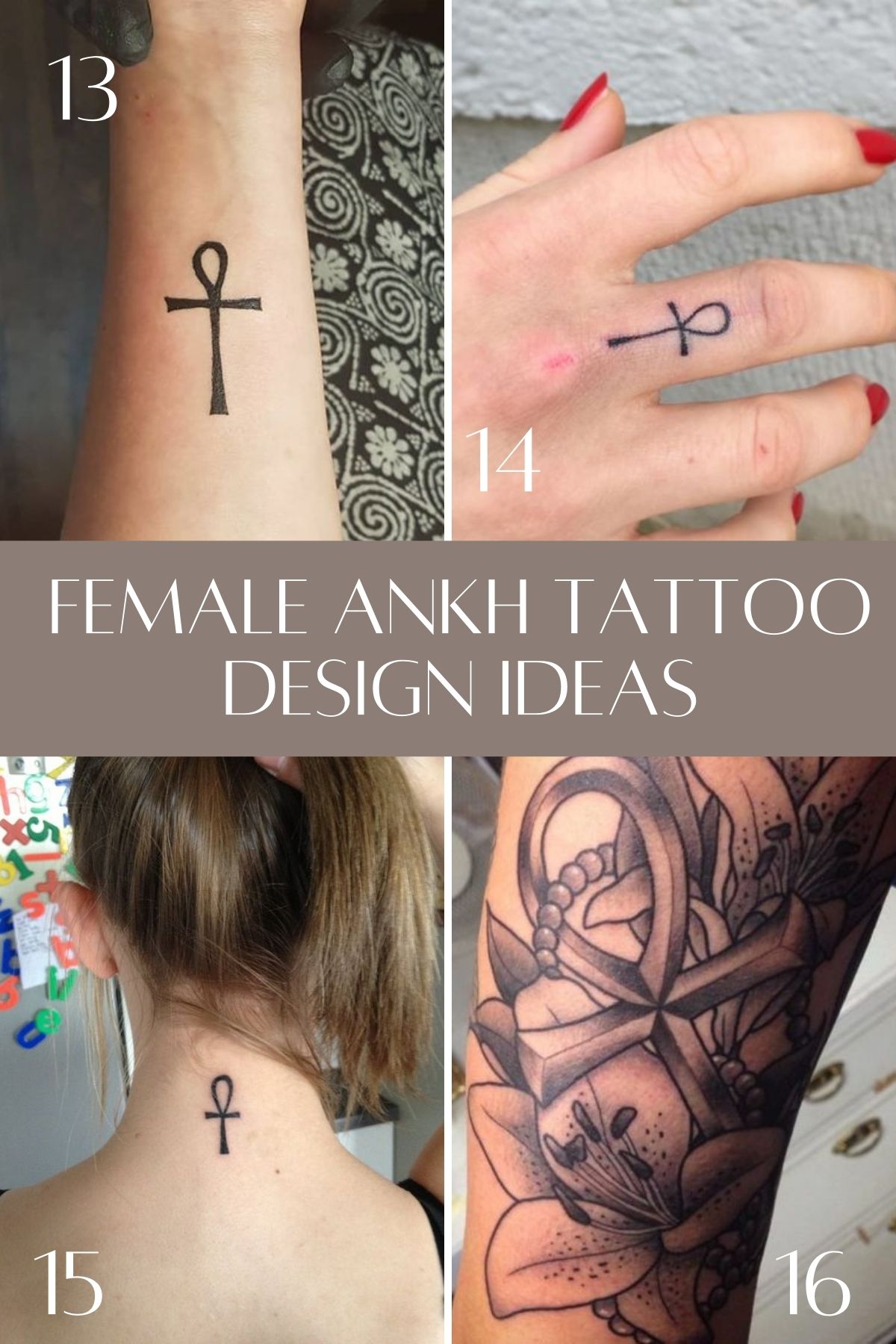 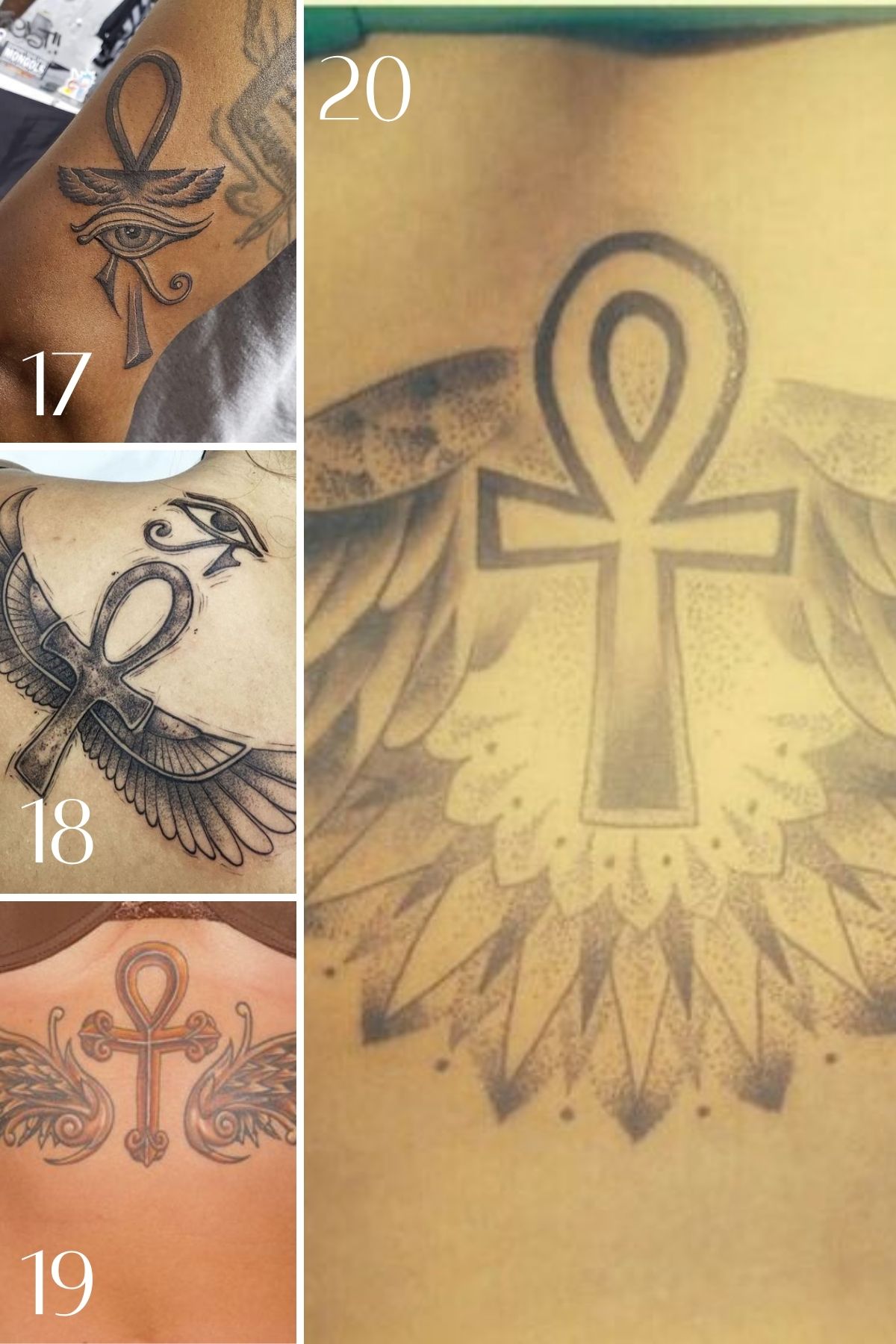 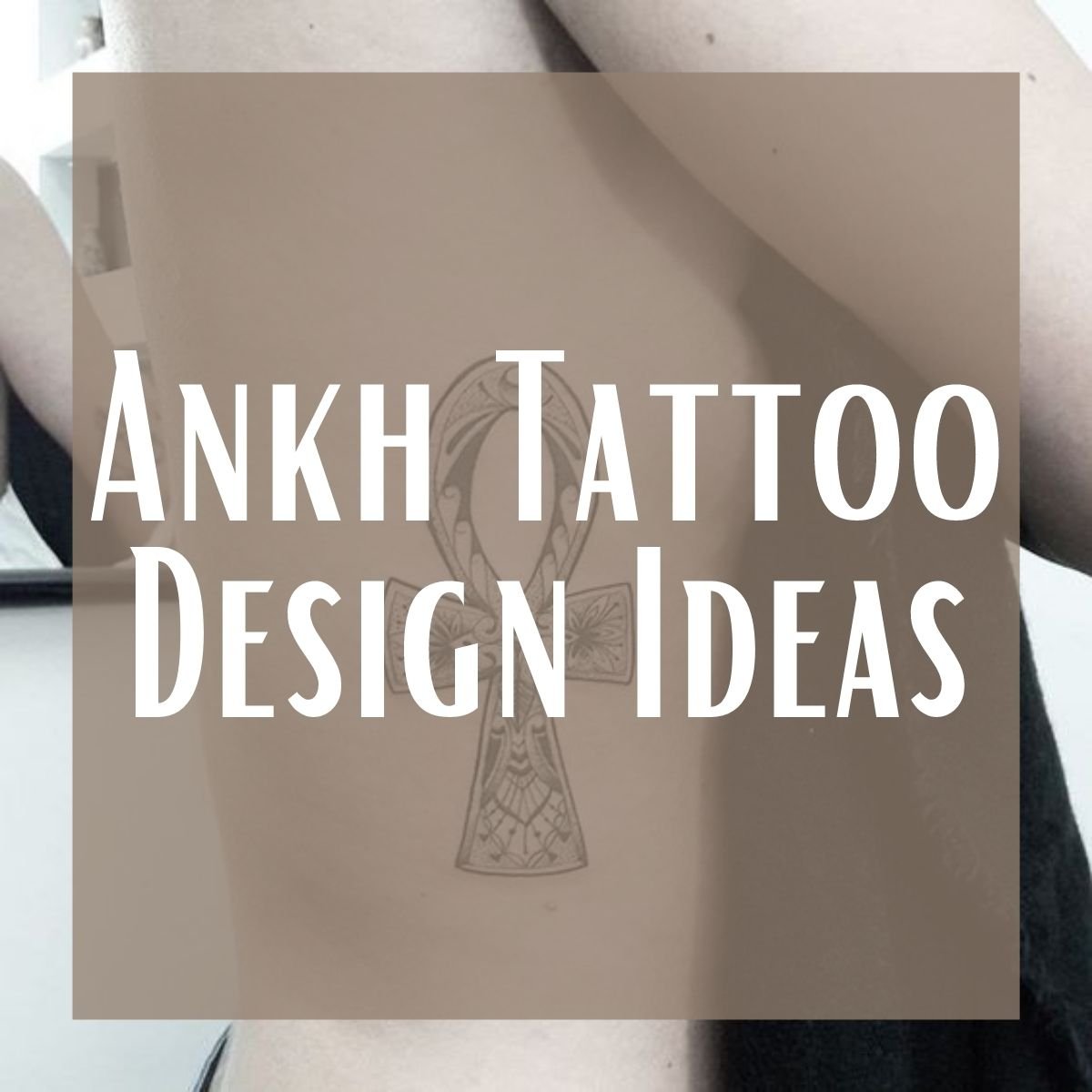