Over the years, tattoos have served various purposes. From being a means of expressing a variety of things including emotions, culture, and personal thoughts, to serving as markings for affiliations and belongings, they have been unique in their own right.

The Chicano art style is a complex but beloved option among the many tattoo designs available to people from the tattoo fonts that create written word to meaningful symbols, this art form is deep with heritage. These tattoos are a unique style of art that can range from straightforward lines to large intricate pictures in ink. 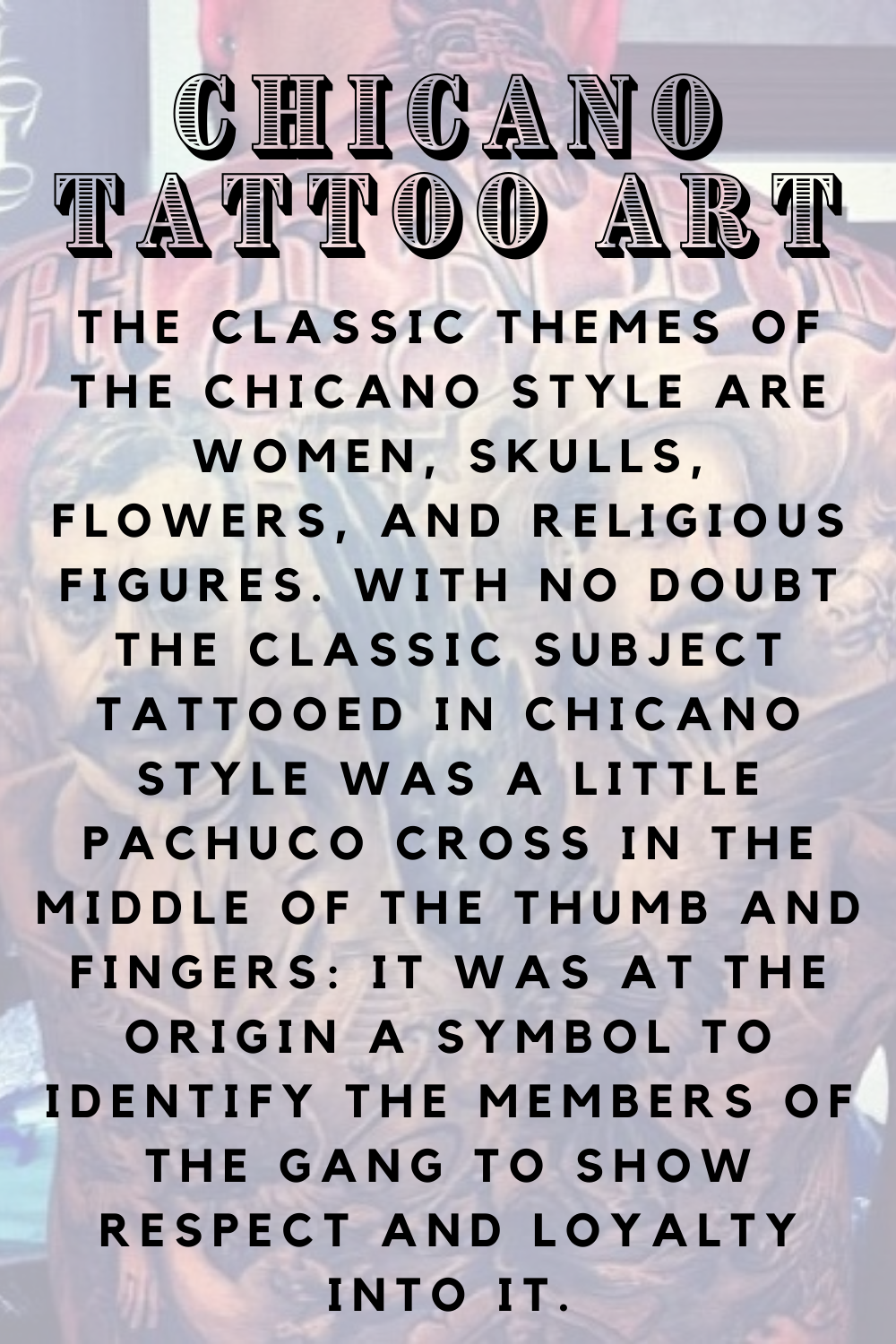 This style of tattoo art that originated in Latin America is quite popular today among tattoo enthusiasts. Skulls, women, religious imagery and flowers are amongst the classic Chicano style’s recurring themes. Without a doubt, a small Pachuco cross in the middle of the thumb and fingers was the standard design for Chicano tattoos. It was the beginning of a symbol used to identify the gang’s members and express respect and commitment to them.

This tattooing technique is a reflection of the strong philosophical and political history of Chicano artists. The arrests that were frequently a result of xenophobic societal pressures on migrating peoples are mostly to blame for the jail culture that, since the 1940s, has profoundly inspired Chicano tattoo arts. Prison inmates would construct a handmade tattoo machine and only use the black or blue ink they could find to create images of what they were most familiar with.

Found in gorgeous shades of gray and black, the history of Los Angeles in the past has had a major influence on Chicano tattoo design. This has primarily been of people who had served prison sentences. Chicano artists in jail made use of their time to express themselves using whatever tools and materials they could find, despite the fact that their circumstances weren’t exactly inspiring.

They created tattoo machines out of guitar strings and painted scenes from their life on their bodies with ballpoint pen ink. The imagery is rich in cultural significance and history, ranging from Lowriders to women wearing hoop earrings and black lipstick to exquisitely detailed representations of the Virgin Mary.

Dating back more than seven decades, the Chicano art style for tattoos has lived on through various channels across history. The art itself is distinct due to numerous reasons, especially due to the historical significance that it holds particularly with those who choose to adorn these illustrations in the form of body art.

The artistic technique that permeates most of the Chicano tattoo trend is highlighted by the smooth gray tones. Given that the artworks’ beginnings are in pencil and ballpoint pen drawings, it seems sense that their aesthetic fusion with the extremely rich cultural background is possible. Although Diego Rivera and Frida Kahlo are well-known for their artwork, Mexico has produced a significant amount of work by other painters like Jesus Helguera, David Alfaro Siqueiros and Mara Izquierdo.

Along with other South American artists, they primarily portrayed political conflict, depicted daily life and represented families in their works. Although these pieces may appear to be a long cry from contemporary Chicano tattoo art, the figurative studies and illustration techniques that combine realism and surrealism help to explain why much of the style of contemporary Chicano art is so distinctive.

The Chicano art tattoo form has remained relatively intact over the years. The meaning behind various symbols and illustrations that fall under this style of art is elaborate while holding exceptional significance for people. For instance, realism and portrait Chicano art tattoos include women, vehicles, celebrities, firearms, family, departed loved ones, clowns as well as iconic figures that were instrumental during the Mexican revolution.

Other symbols of Chicano art tattoo include the following:

Features the Pachuco cross, Jesus, the Virgin Mary, crosses, and hands in prayer. Three dots are inked atop a cross in the Pachuco cross. The cross represents God, and the three dots stand for my wild life, or mi Vida Loca. This tattoo, which is frequently applied using the stick-and-poke method, is both religious and indicative of gang membership.

The expression shown on tattoos is frequently used to signify holding back your tears or signs of vulnerability until you are released. Among Chicanos who are members of gangs, this tattoo, which has two faces—one laughing and the other crying—is quite common. These stand for resilience and strength. You can use clowns, masks, or comics with or without lettering. There are many variants of the phrase “Laugh now, cry later,” including “My happy life, my tragic life,” “Play now, pay later,” and “Smile now, cry later.” 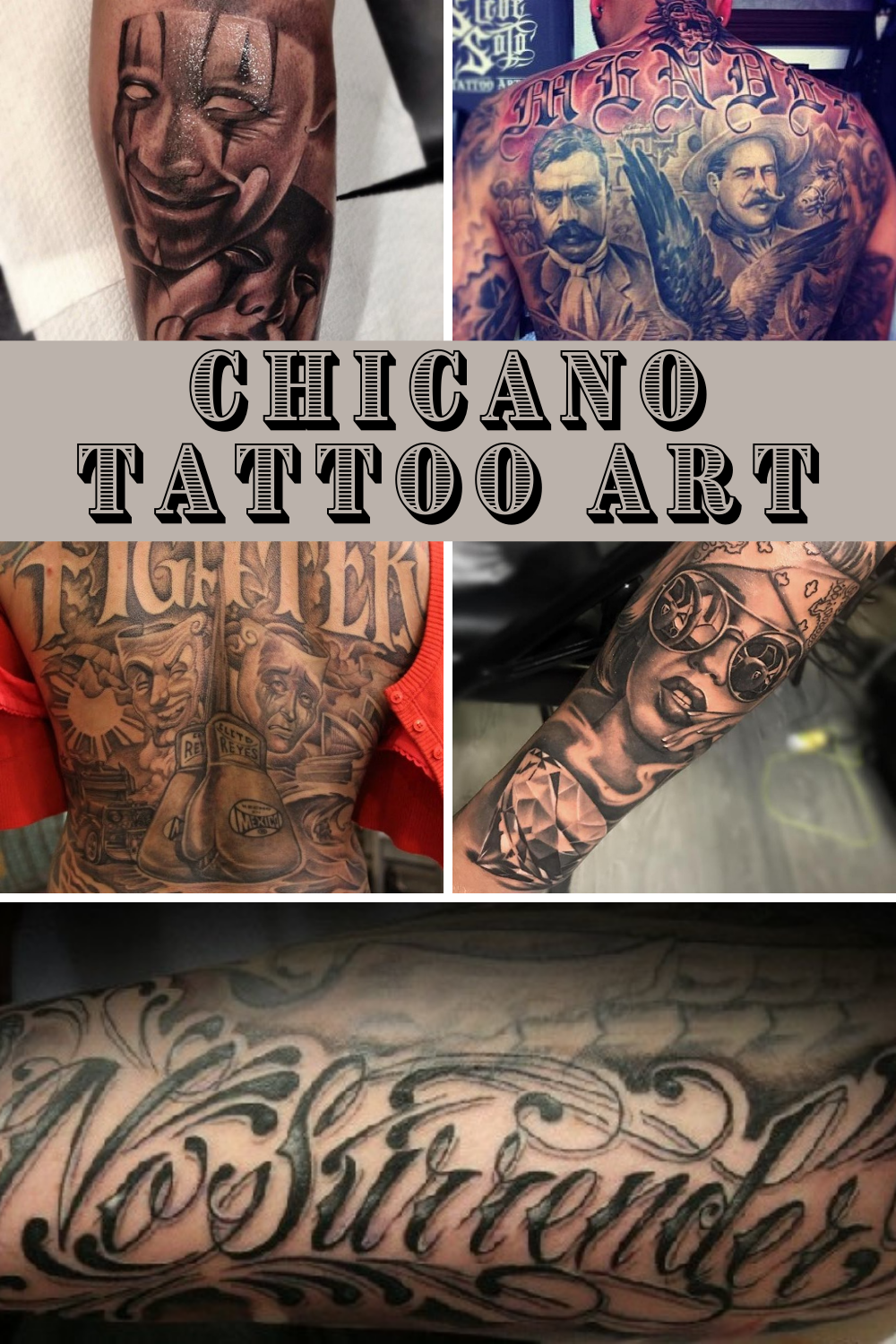 Another commonly used symbol in Chicano tattoos. The eagle is an Aztec symbol for warrior and also features on the Mexican flag which gives it deep significance to many in this community.

Celebrating the dead that have gone before us, these are popular symbols to get as a reminder of the family that has passed before us.

Chicano art tattoos are famous for their deep cultural heritage and rich history. For many, they hold deep significance but for others, they are mere attractive art forms. Nevertheless, they are intimate and extensive features that have passed through generations.