As a teenager, Megan made the decision to have her first tattoo at the age of 18. On her forearm, she chose to have a tattoo of Marilyn Monroe as a reminder to stand strong and not get sucked into the negative.

Because she has had so many tattoos inked on her skin, it’s not surprising that she doesn’t love all of them! As a matter of fact, she has dealt with tattoo removals.

We’ll take a closer look at Megan Fox’s tattoos, including where they’re located and what they symbolize. Let’s get started! 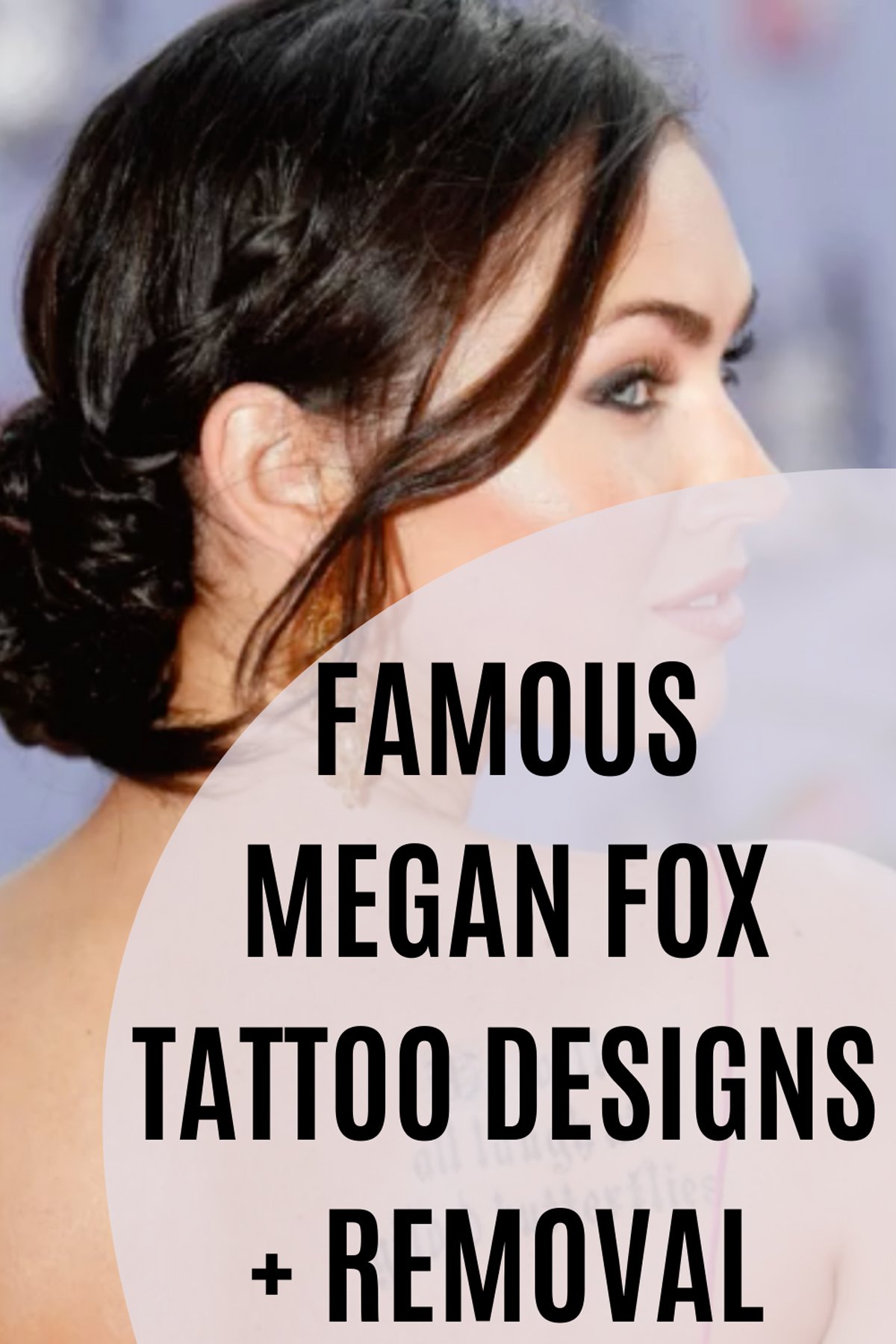 Does Megan Fox Have Tattoos?

We aren’t sure how many tattoos she has, but believe it’s 8 or 9.

Here is a list of tattoos that we know of!

Chinese Symbol for Strength: On the back of her neck, she has the symbol for the word “strength.” It’s done in black ink and looks fantastic.

A Friedrich Nietzsche Quote: On the side of her back, you will find a tattoo that reads, ” And those who were seen dancing were thought to be insane by those who could not hear the music.” This quote comes from Friedrich Nietsche. 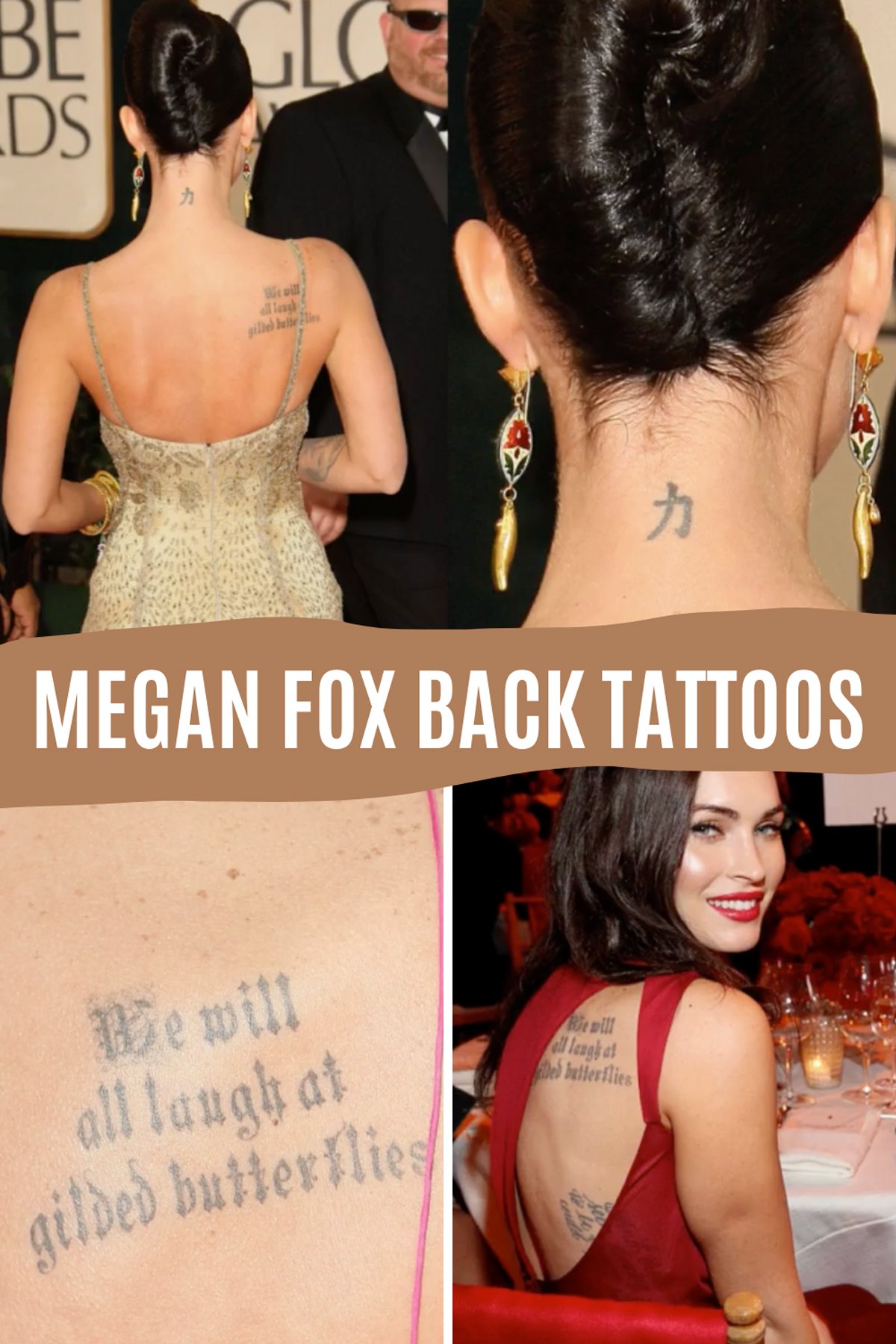 Poem: She has a poem that reads, “There once was a little girl, who never knew love until a boy broke her heart.”

Sadly, this tattoo is very relatable to many of us! We all get our hearts broken at some point.

Megan Fox Brian Tatoo: Her ex-husband, Brian Austin Green, is the focus of the tattoo on her inner hip. It’s a simple handwritten script that reads “Brian.”

On her wrist, you will find a black symbol that can represent yin and yang. While she hasn’t publically explained the meaning of this particular tattoo, it’s what we have found during our research to be the meaning.

Crescent Moon with Star: If you are a fan of Megan Fox, it’s not surprising to know that she has a lot of interest in astrology. So, it makes sense that she got a tattoo of the moon along with a star.

At the 2020 American Music Awards, Fox and Kelly made their public red carpet debut as a pair. The actress’ collarbone was inked with a little black tattoo as the two posed for pictures. In Spanish, “el pistolero,” or “the gunman,” is written in black ink.

People on social media claimed that Fox got the tattoo as a tribute to her boyfriend, Machine Gun Kelly, because of his stage persona. The actress, however, has not acknowledged the significance of the tattoo. 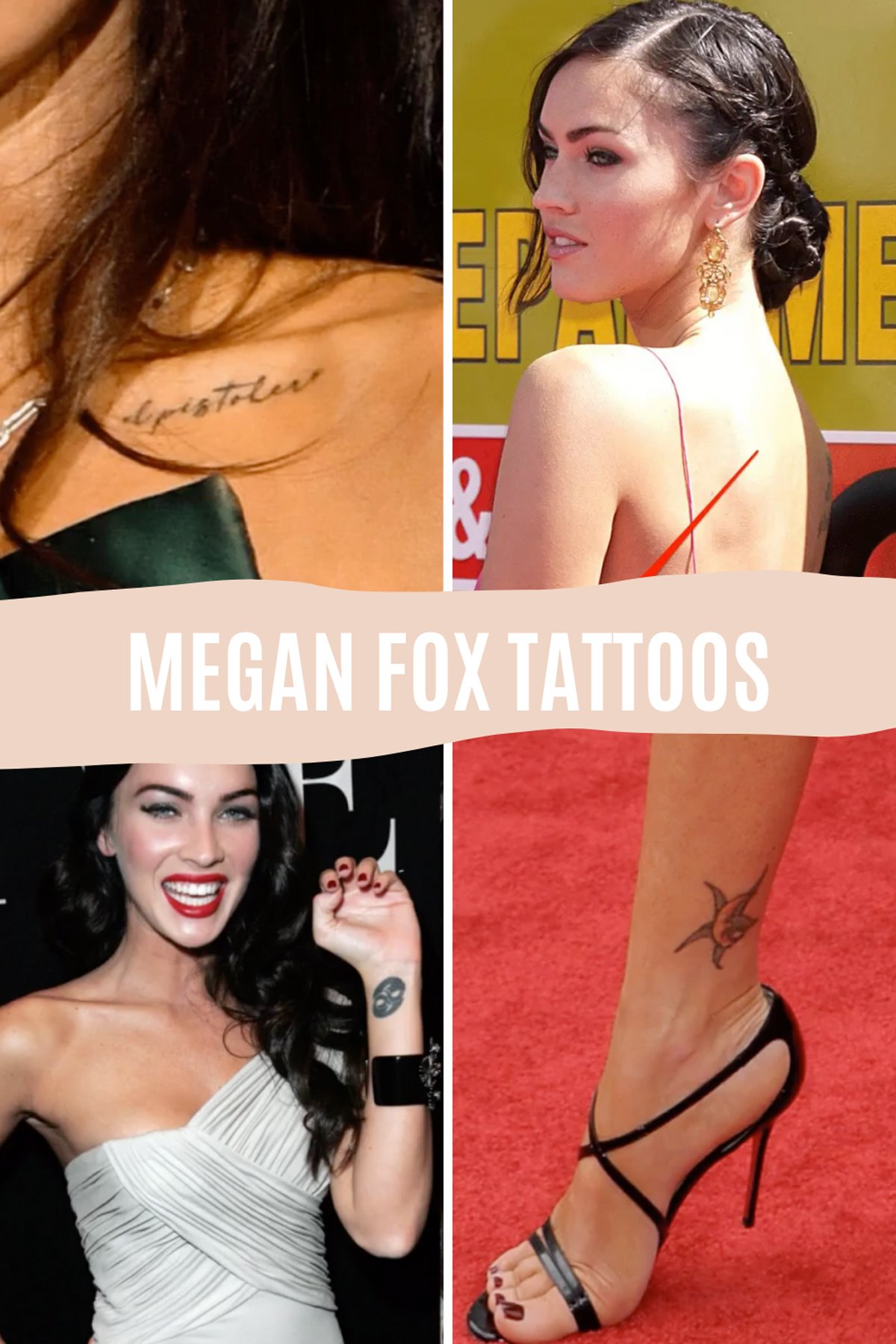 The procedure of removing a tattoo isn’t always easy, but it can be done for a variety of reasons. Megan is no stranger to having a tattoo removed!

After concluding work on “Transformers,” Fox had an image of Marilyn Monroe drawn on her forearm (2007).

While Megan was intrigued by Marilyn Monroe, this tattoo was to be used as a reminder and warning to not allow herself to be treated poorly.

Once Fox discovered that Monroe had struggled with being bipolar and some eating disorders, she decided she wanted to get the ink removed.

It’s been said that Megan is trying to keep negative energy out of her life, so removing the tattoo was something she felt strongly about.

Megan still considers Marilyn Monroe to be iconic and loves her, but she realized that it wasn’t the artwork or negative energy she wanted any longer. 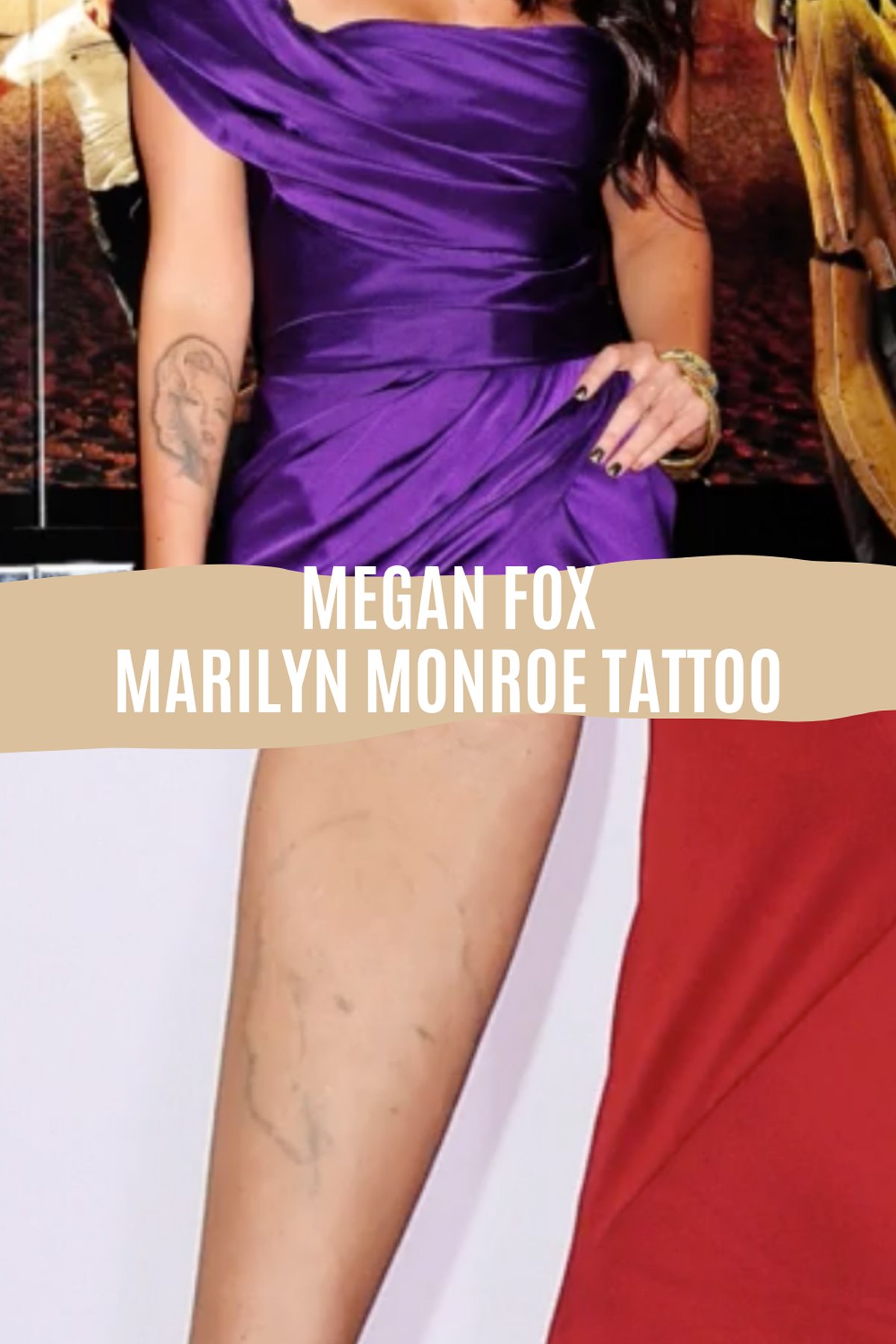 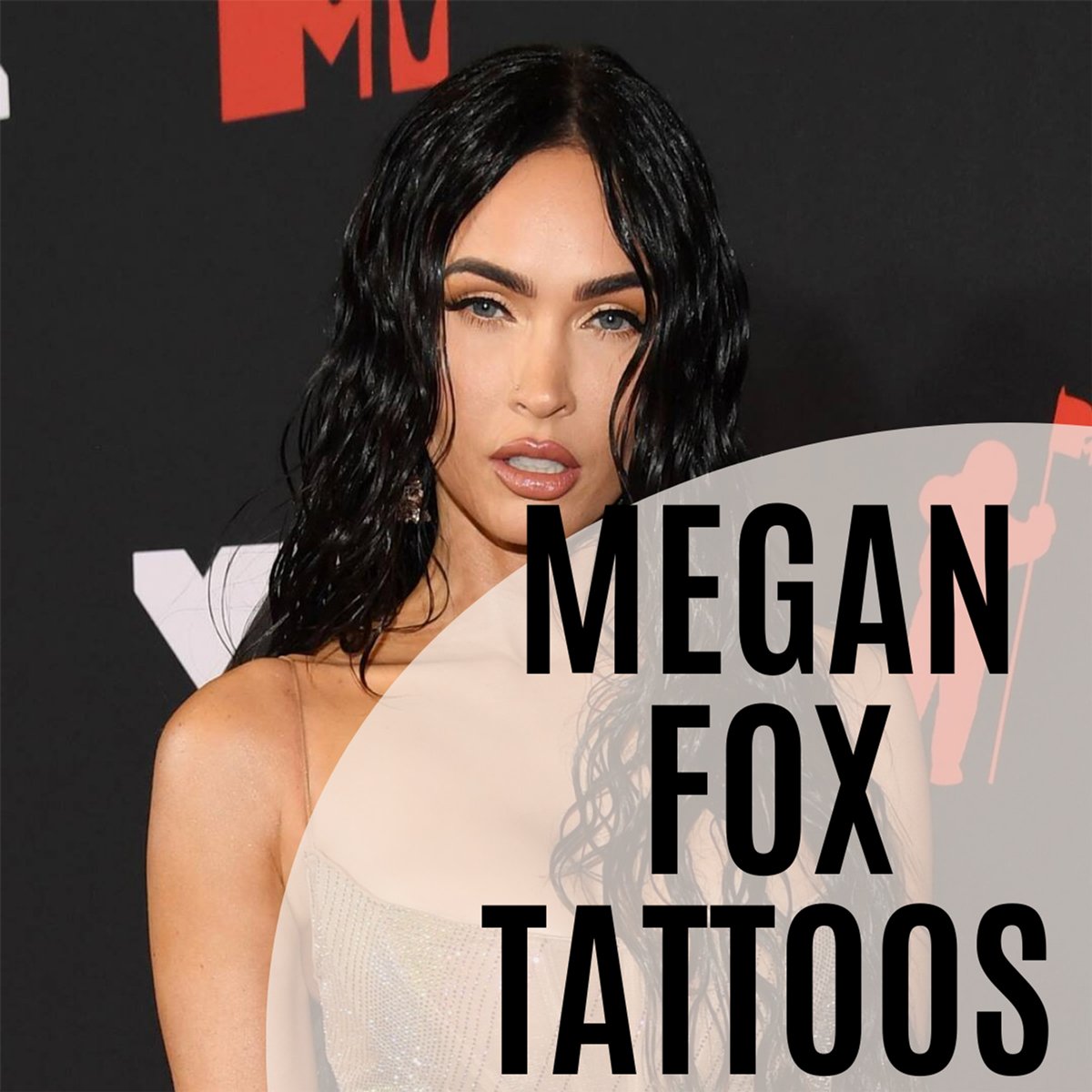