Winnie the Pooh is one of the most beloved books and animation characters in the world!

The bear with no pants, known also as Pooh Bear or just Pooh, is a teddy bear created by author A. A. Milne and illustrator E. H. Shepard in 1921.

The major theme of Winnie the Pooh is the importance of friendship, which makes a great tattoo application when applying Pooh’s positivity and optimism to body art.

The colorful characters from Winnie the Pooh make for interesting tattoo designs ranging from simple artistic recreations to those aligned with mental health issues, and even highly technical watercolor and neo-traditional designs.

Check out all these design ideas and some more fun Winnie the pooh tattoo inspiration. 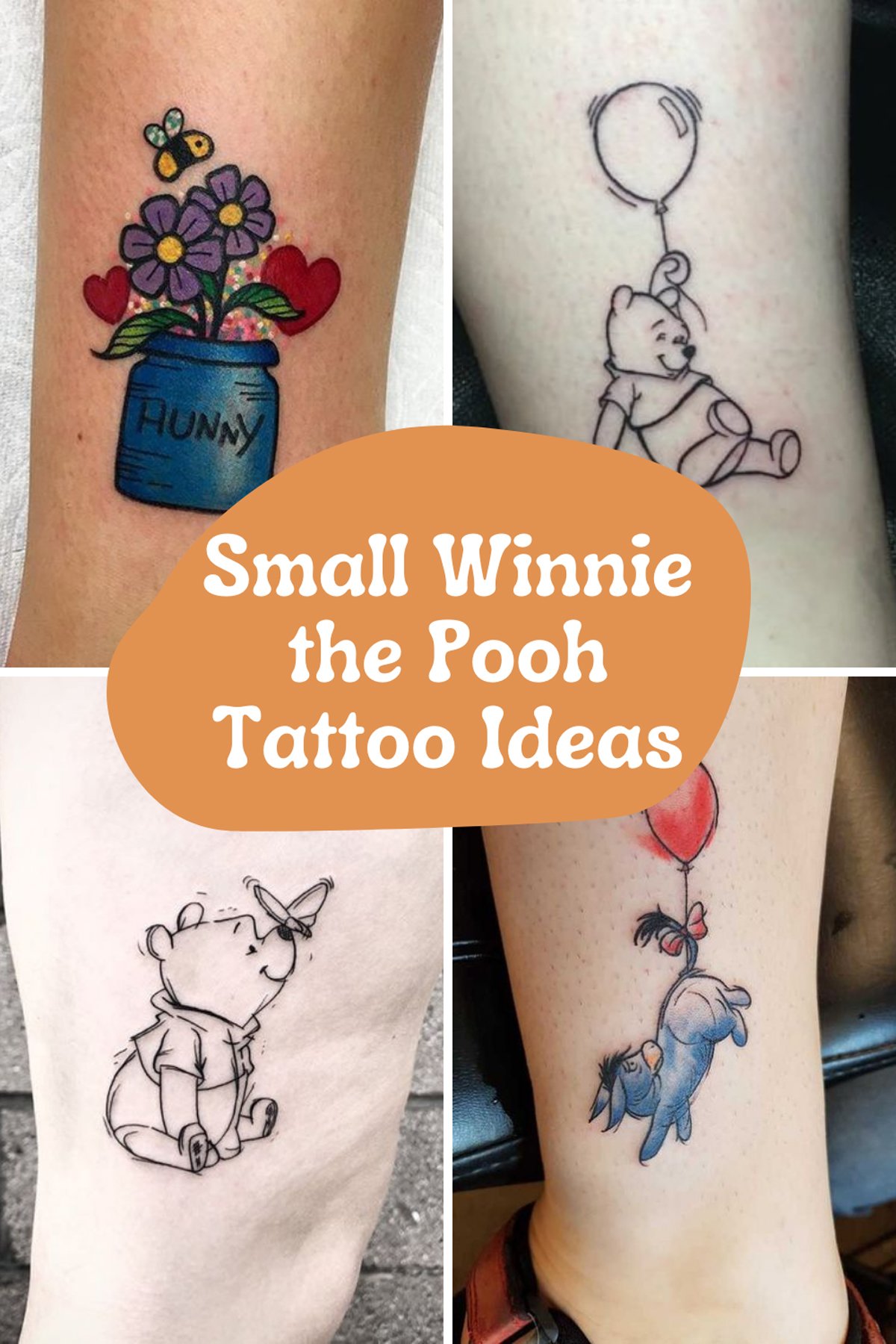 Most people with a Winnie the pooh tattoo will tell you it reminds them of better times. A nostalgic sense that takes them back to the times when things were less stressful. However, others will tell you it’s Pooh’s good nature that led them to get him inked on their skin.

In other cases, they may just be a fan of the series and the characters. All the characters in Pooh’s stories have their own personalities that might resonate with someone reading the book or watching the shows. There is a character for every kind of fan which makes the Winnie the Pooh tattoo a popular choice for Disney fans.

Whatever your reason may be for getting a Winnie the Pooh tattoo, make sure you do your research and decide if it is the right tattoo for you.

1. Pooh Tattoo with Butterfly on His Nose

2. Winnie the Pool Holding a Balloon

3. Smiley Outline of Winnie the Pooh

5. Winnie the Pooh with Ladybug

16. Pooh and Friends Peeking Out

17. Winnie the Pooh and Piglet Tattoo

23. Eeyore Floating Away with Balloon 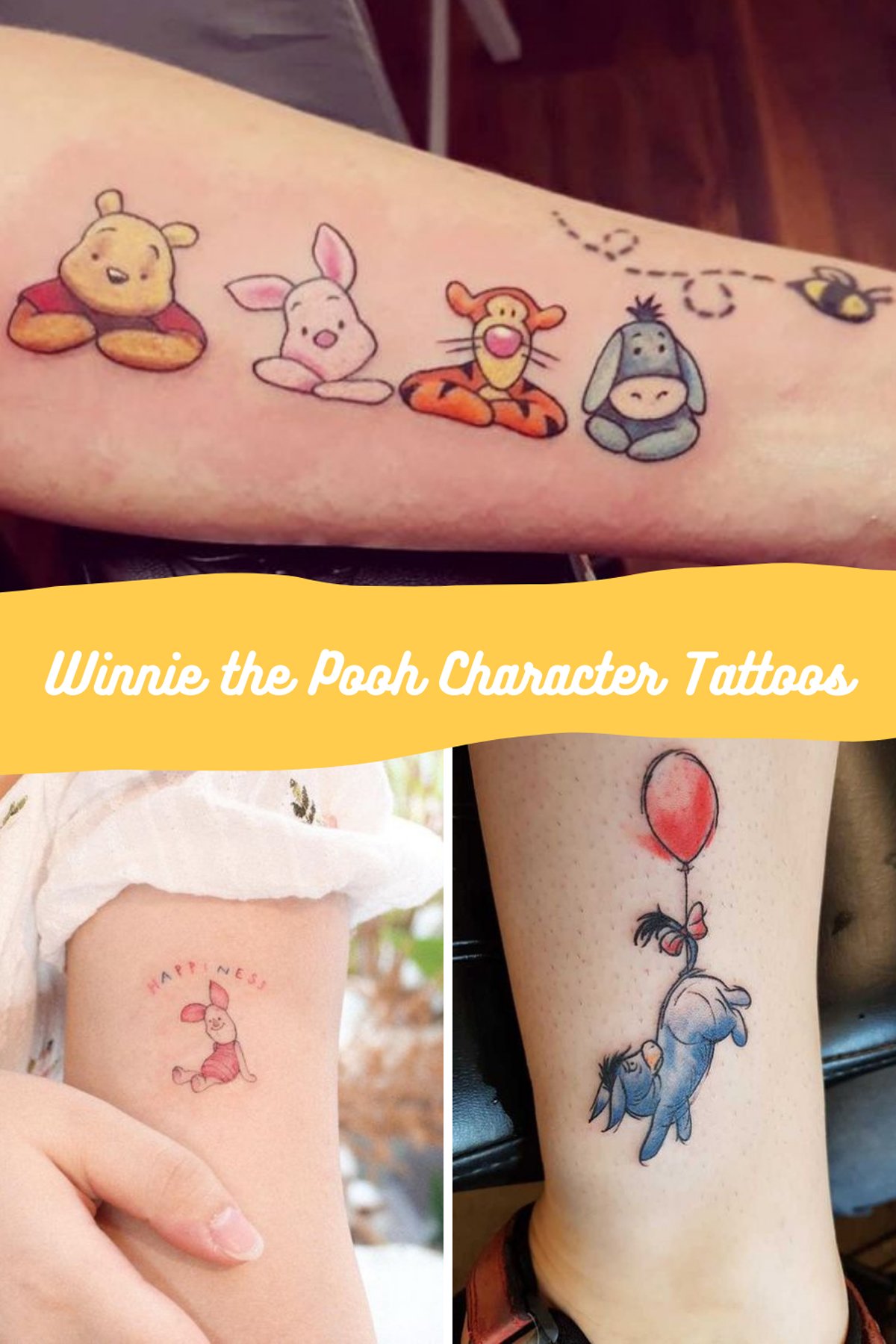 24. Outline of Pooh and Piglet

36. Pooh Watching a Balloon Float Away

37. Pooh Tattoo with Butterfly on His Nose

38. Winnie the Pool Holding a Balloon

39. Smiley Outline of Winnie the Pooh

41. Winnie the Pooh with Ladybug 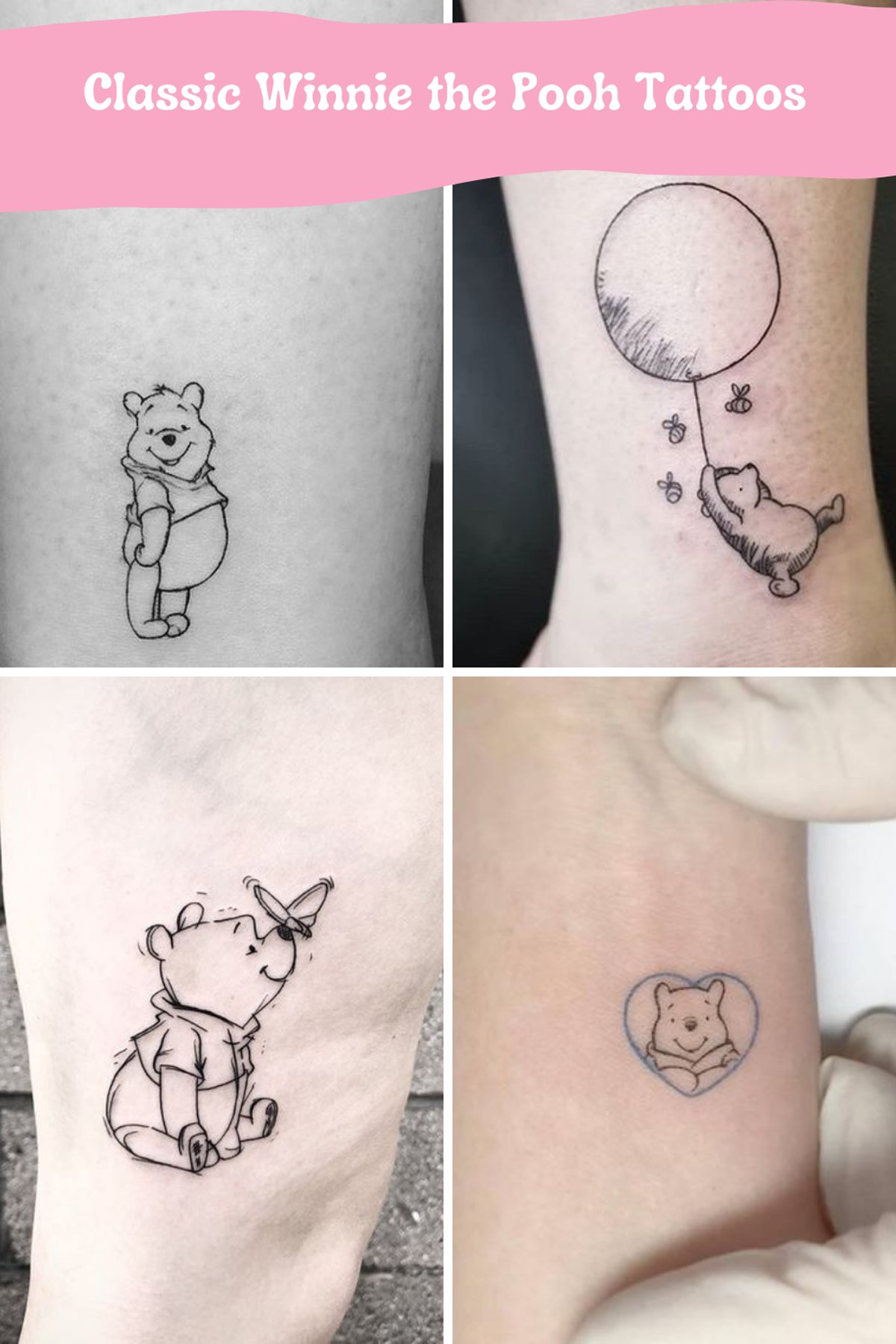 57. Pooh Looking at the Moon and Stars

Winnie the Pooh is a beloved and well known show with lots of wise words of wisdom. If you want to skip the character tattoos, but still want to stick to poohs theme, then check out a few of our favorite quotes from Winnie the Pooh himself.

61. How lucky am I to have something that makes saying goodbye so hard. – Winnie the Pooh

63. Together is a wonderful place to be.

64. The nicest thing about the rain is that it always stops. Eventually.

65. Enjoy the little things in life.

68. When all else fails just take a nap.

69. When life throws you a rainy day, play in the puddles.

71. Give someone a lift today. 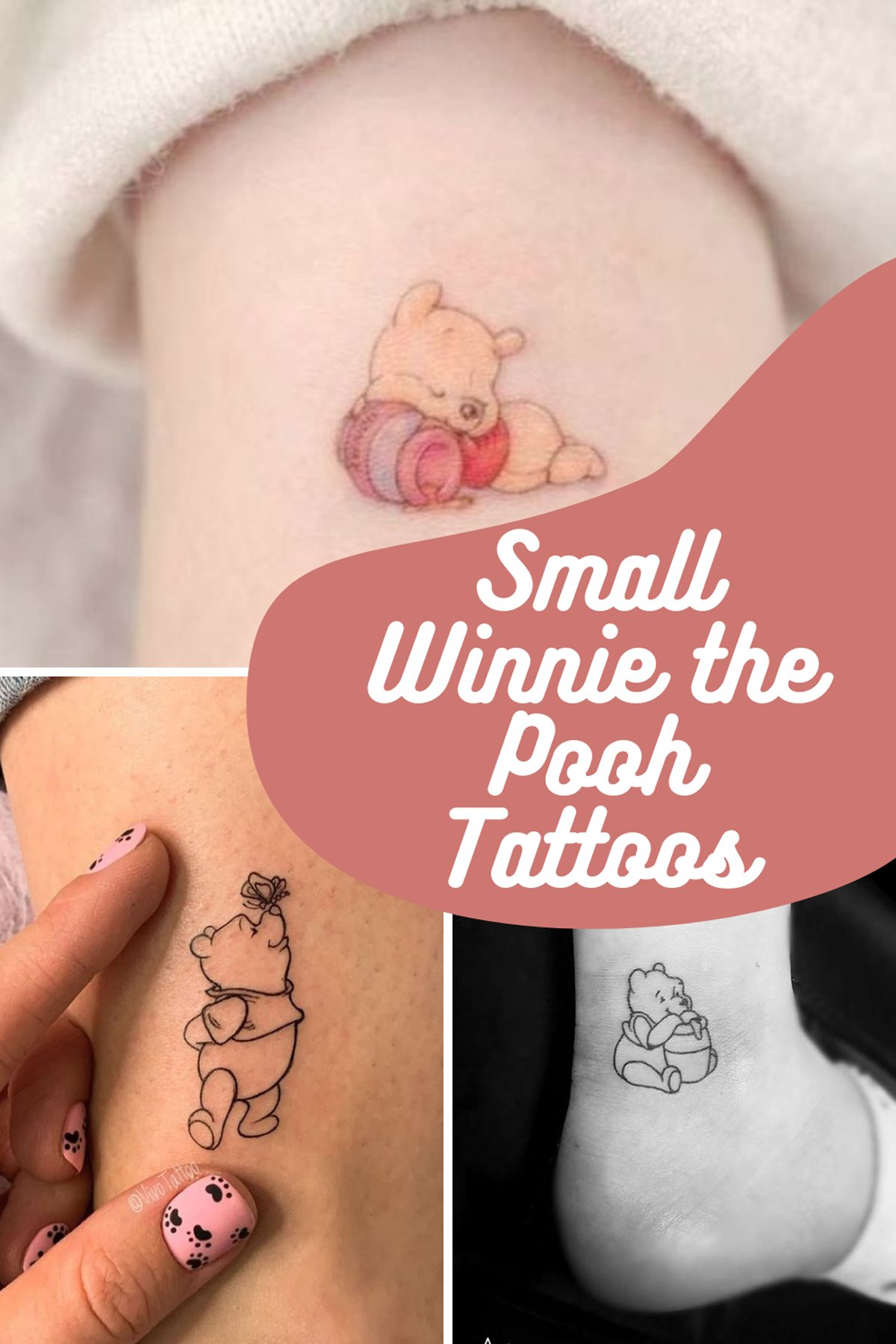 78. Pooh Watching a Balloon Float Away

79. Pooh Tattoo with Butterfly on His Nose

80. Winnie the Pool Holding a Balloon

81. Smiley Outline of Winnie the Pooh

83. Winnie the Pooh with Ladybug

If you like these cute Winnie the pooh tattoo designs then check out a few more of our favorite ideas and inspiration. 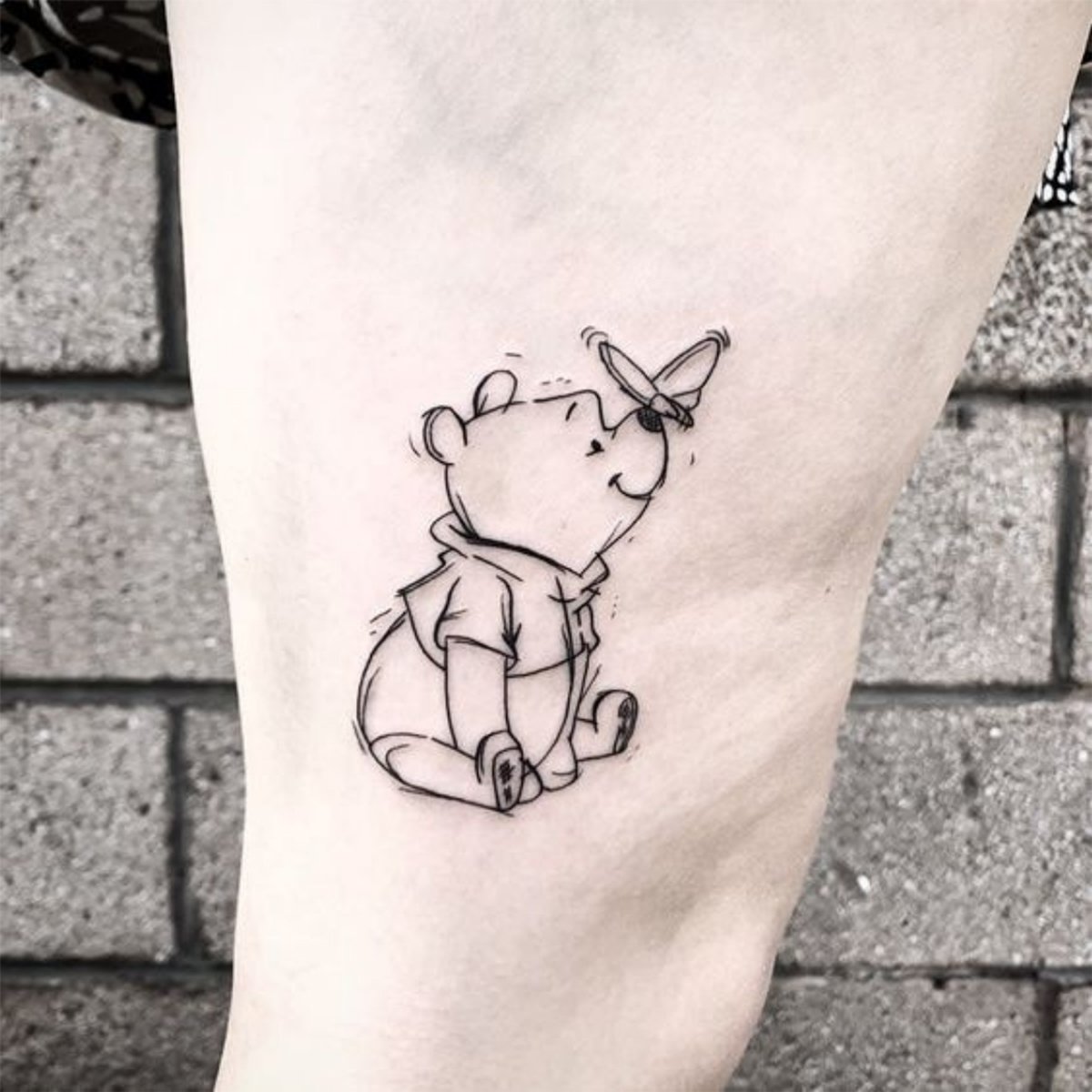