Do you want to express your ties with ancient tribes through a tattoo? Get an ancient art tattoo and show the world you are proud of your heritage. 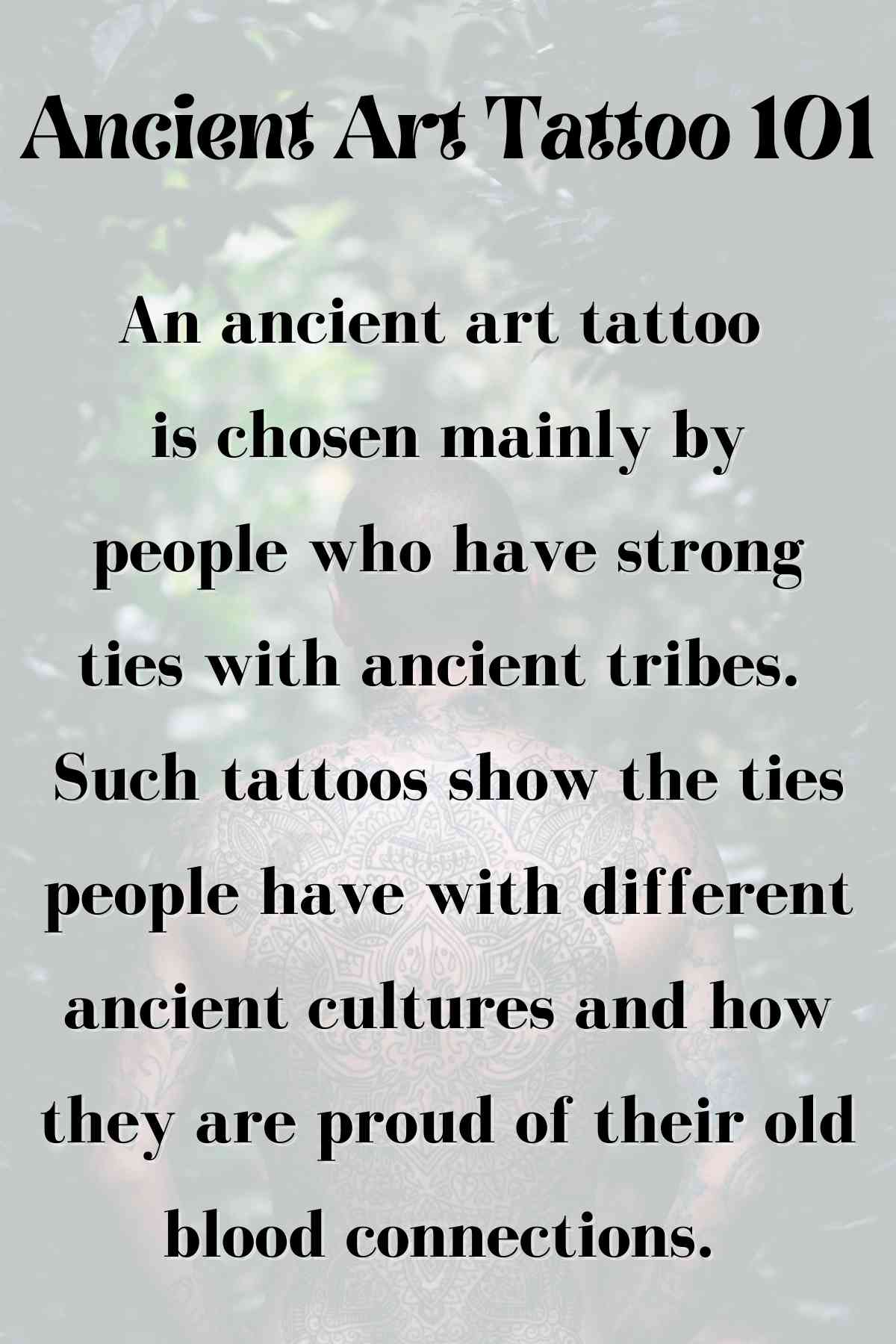 An ancient art tattoo is chosen mainly by people who have strong ties with ancient tribes. Such tattoos show the ties people have with different ancient cultures and how they are proud of their old blood connections. However, today, many people choose to get an ancient art tattoo because of its monochromatic, striking design and the diversity it offers.

You may have seen celebrities like Dwayne “The Rock” Johnson and Jason Mamoa proudly showcasing the Samoan ancient art tattoo on their body to represent their ties with the culture. They are a major reason why these tattoos gained popularity over time.

Let’s look at the history and meaning behind ancient art tattoos!

What is an Ancient Art Tattoo?

Tattooing is an ancient art, and it can be traced back to the Bronze age, which was about 5000 years ago. Tribespeople displayed tattoos on their bodies to show which tribe they belonged to. In fact, people were recognized through each tribe’s unique patterns and design.

Geographically, you can find tattooing in ancient Japan, Greece, Egypt, and even North America and Europe. Samoan, Marquesan, and Polynesians are famous for their tattoos. These and many other cultures inspire today’s ancient art tattoos.

However, tattoos were not used as a creative outlet at that time. In fact, tribespeople had tattoos to represent loss, suffering, coming of age, or spiritual or religious belief. This is how ancient tattoos came into being and are now a global tattoo phenomenon across the globe.

Is it Offensive to Get an Ancient Art Tattoo?

It is not offensive to get an ancient art tattoo.

However, some symbols and motifs are special in ancient cultures. These tattoos are considered special because they were reserved for people in the tribe who were deemed to be worthy and had to go through some pain and suffering to be deserving of receiving the honor of getting those tattoos.

So, it is better to avoid such tattoos so that you are not disrespecting any cultures from which you have taken inspiration.

You can always speak to an experienced tattoo artist or someone who has ties with the tribe or culture you have taken inspiration from for your ancient art tattoo. 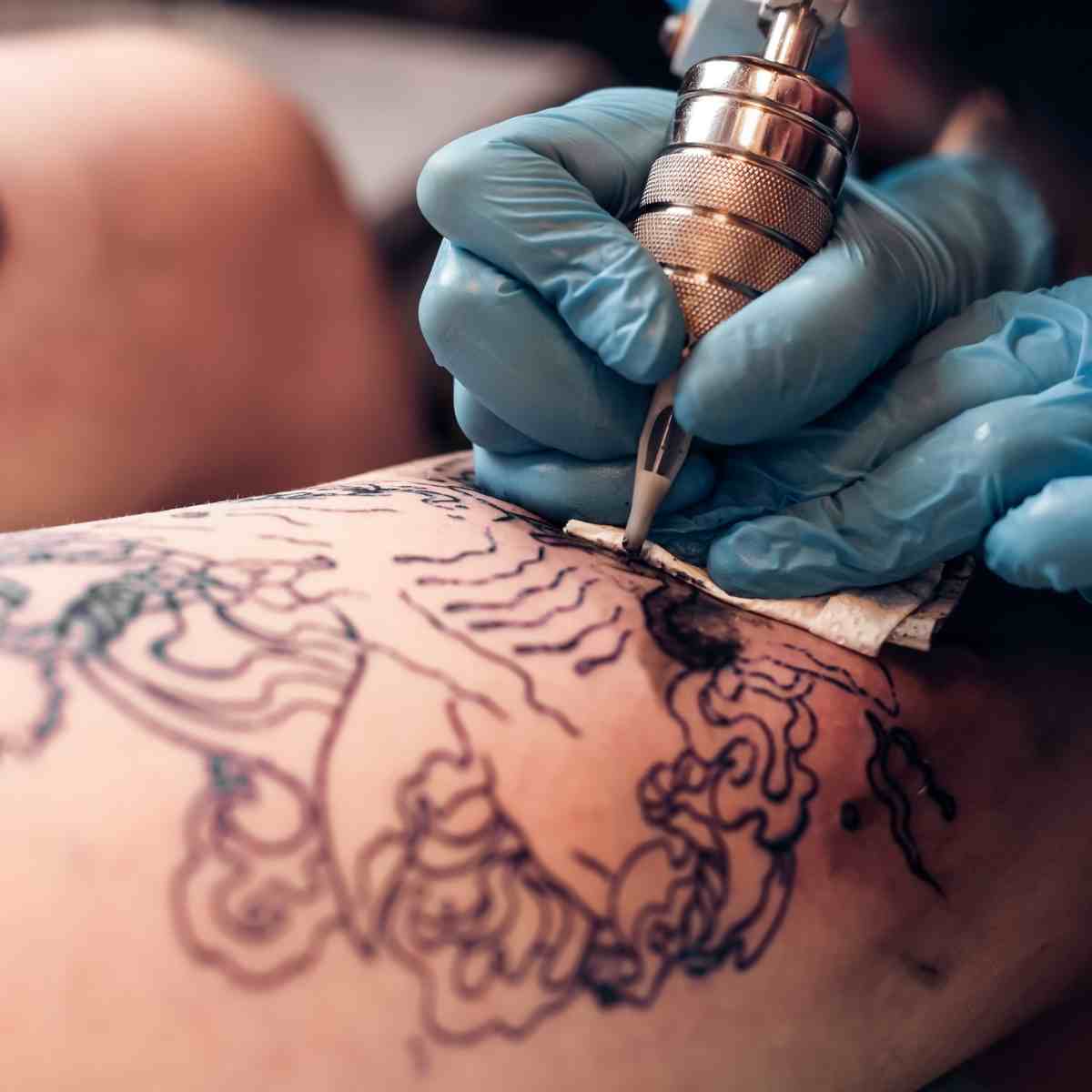 What are the Types of an Ancient Art Tattoo?

An ancient art tattoo is derived from many different tribes and cultures. Have a look at some below:

The Hawaiian ancient art tattoo goes back to the time when Hawaii was not colonized, and these tattoos were for expressing ties and connection with the sky, sea, land, and spirit. This is why these designs have such elements incorporated into the tattoo. The elements combined with beautiful geometrical patterns give this ancient art tattoo an organic feel.

The design of this ancient art tattoo comes from the Maori culture of New Zealand. It has many swirls and striking geometrical patterns that give that tattoo a powerful and bold look. However, people usually choose to get these tattoos across their chest and shoulders instead of their faces.

The Indian-inspired tattoos express the spiritual or religious journey of a person and mainly feature curved lines and intricate images of Hindu Gods. They look good on wider body parts where the design can be fully displayed in all its glory.

Unlike other cultures, an ancient art tattoo inspired by the Mexican culture has a more creative and stylish design. It features many images like temples, hands, fangs, tongues, and imagery of ancient Gods. Due to the many different elements, you have more freedom to come up with an artistic design.

Much of the inspiration for ancient art tattoos in America comes from Polynesian culture. The design carries a lot of thick dark lines and also has a lot of negative space to create an exquisite design that is bold, eye-catching, and stylish. 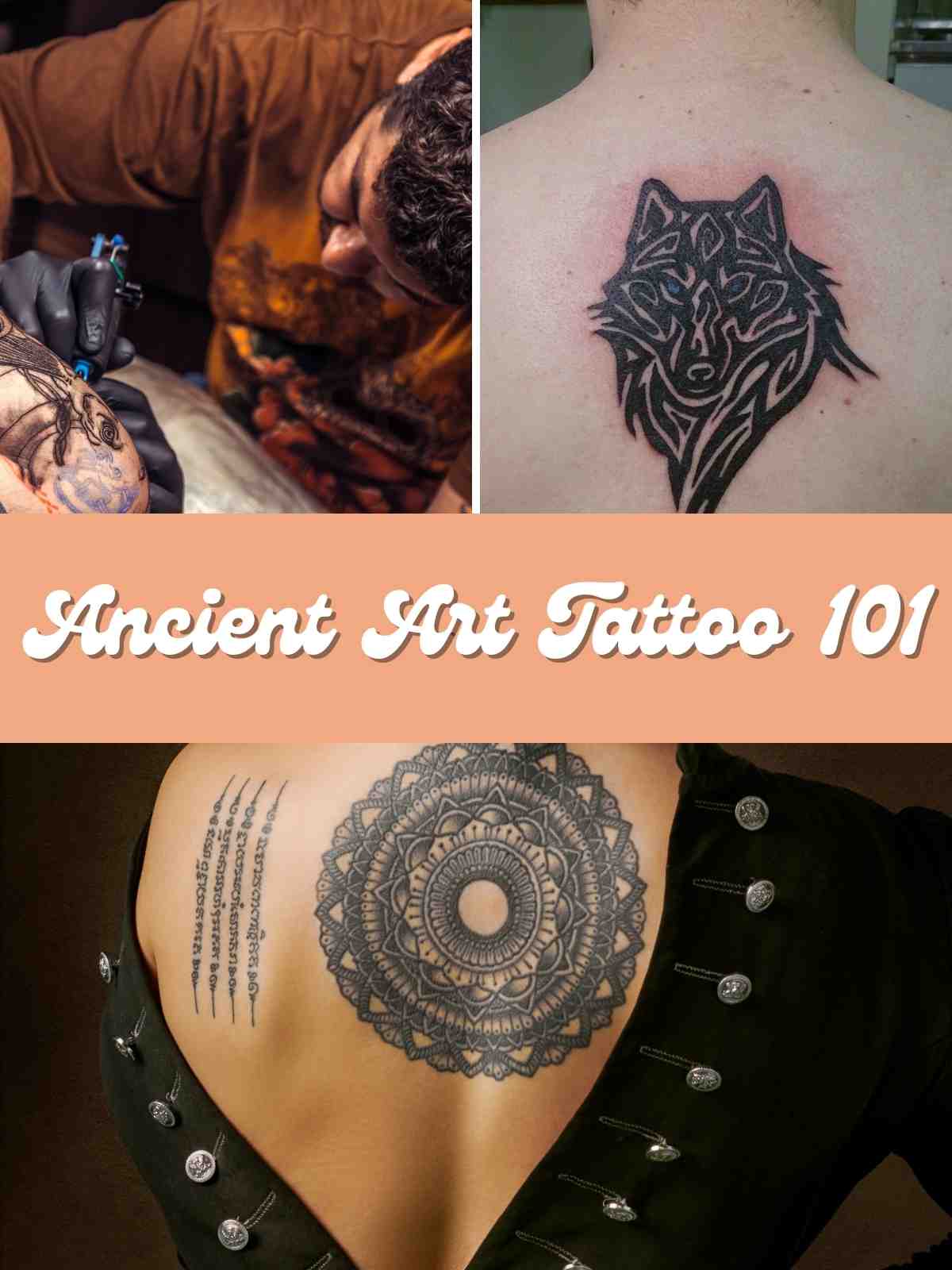 Here is some inpiration f

1. A sleeve of traditional elements

Snake Tattoos for Women: Have you always been drawn toward the power snakes hold? Snakes are often believed to be evil, but on the contrary, they have relevance in many cultures globally and are thought to be mystical creatures. Imagine the striking image of a snake coiled around your arm and the strength it will give you. Check out these tattoos and display your powerful personality through a snake inked on your body.

Ghost Tattoo Ideas: Do you love all things spooky and creepy? If so, have a look at these brilliant designs for ghost tattoos. Take your pick and get an adorable ghost tattoo for your love of Halloween or to scare off people with a creepy ghost tattoo. Browse through these 27 ghost tattoo ideas and get some inspiration for your next tat.

Think Positive Tattoos: Are you the kind of person who can easily spot the silver lining in everything? Do you believe in spreading positive vibes only and always have something positive to say to friends when they feel down? Well then, check out these think-positive tattoos that you will absolutely love. Show off your favorite quote and spread some positivity.

To conclude, you must understand that an ancient art tattoo holds a lot of meaning and is a symbol of honor for people who belong to these cultures. It is a great way to appreciate and show appreciation for your elders and the ancient blood that flows in your veins.

However, if you do not belong to the indigenous cultures or your family does not have the history of these incredible ancient tribes, it is recommended that you speak to someone who belongs to these cultures. Hence, you have an idea about the meaning of these designs and do not end up getting a tattoo that is special for the tribe.