Home » Dictionary » What Is A Sak Yant Tattoo & Where To Get One
Dictionary, Travel Tattoos

Tattoos, like any form of art, are native to certain cultures and countries – and most people belonging to these regions get certain tattoos as a representation of their culture. Tattoos are a form of body modification that, most of the time, people get done to express their feelings, thoughts, and beliefs.

And this is exactly why we see so many people with tattoos that represent their religious beliefs or cultures.

One such very popular tattoo is the Sak Yant tattoo. 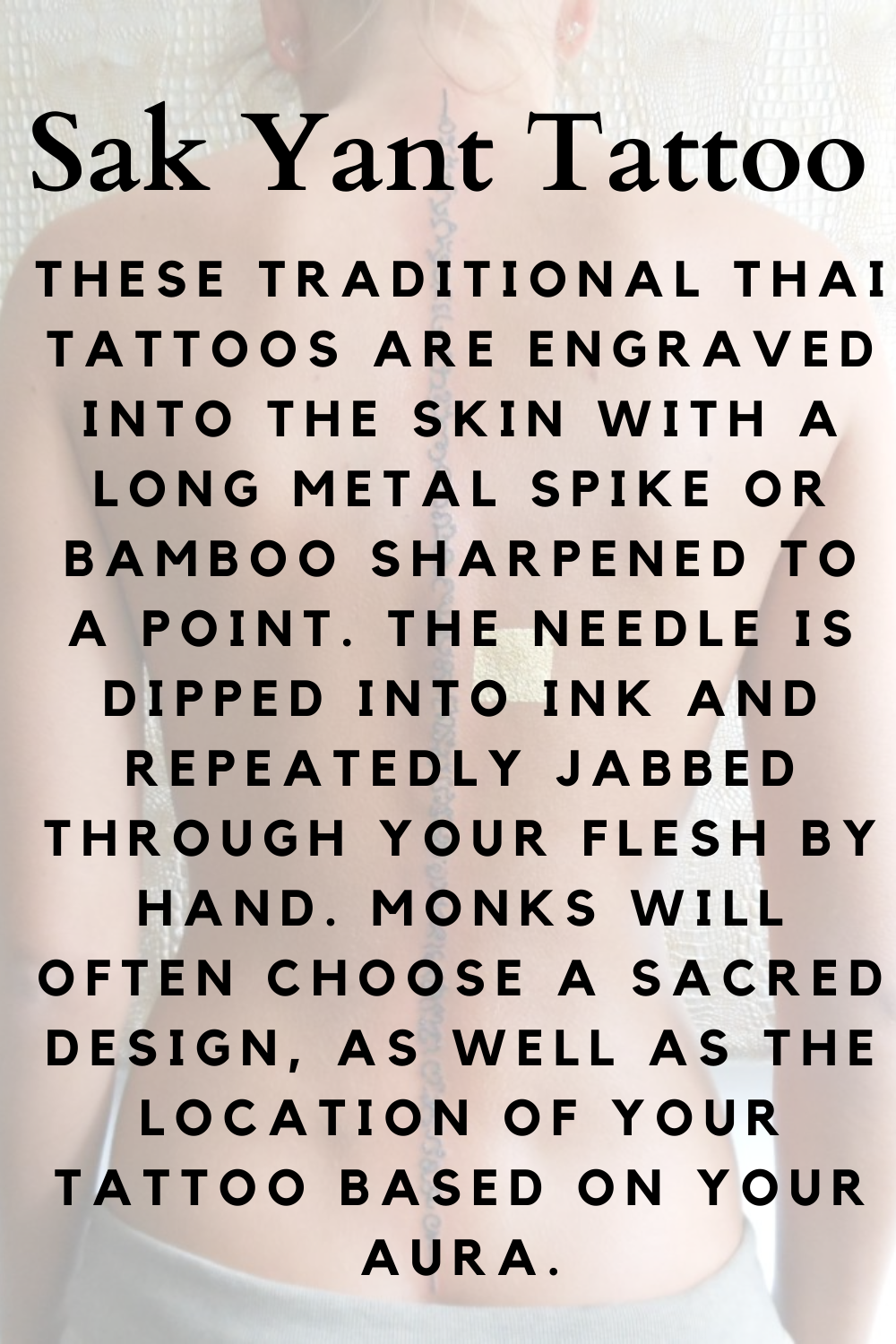 Almost every religion and culture in this world have sacred symbols, phrases, and animations that their followers keep close to themselves, on their body, in the form of a tattoo. Just like that, the Sak Yant tattoo is a tattoo with a religious and cultural background – which most people get as a representation of their beliefs. However, it has now gained popularity across different regions of the world – and not only are more and more people curious about the true meaning behind this tattoo, but a lot of people are also getting it on their bodies.

If you are also one of those people, then this article is for you. Today we are talking about the popular yantra tattoo called the Sak Yant tattoo, its history, meaning, and different designs. So keep reading!

What is the Sak Yant Tattoo?

The Sak Yant tattoo is basically a form of tattoo or a type of tattoo that is popular in Thailand. It is also most commonly called the “yantra tattoo” because it features the Indian yantra designs or the “Buddhist tattoo” because it represents religion. The Sak Yant tattoo has many different designs that are characterized by the presence of deity designs, animal representations, and sacred geometrical shapes – along with phrases (or mantras) written in the language Pali.

The Sak Yant tattoos originate from the concept of mysticism; they represent the mystical form of Buddhism – also known as the Tantric Theravada. According to the believers, these tattoos have existed for over 2000 years – however, they recently became famous internationally because of Muay Thai fighters and celebrities like Angelina Jolie. Let’s understand the true meaning behind these tattoos. 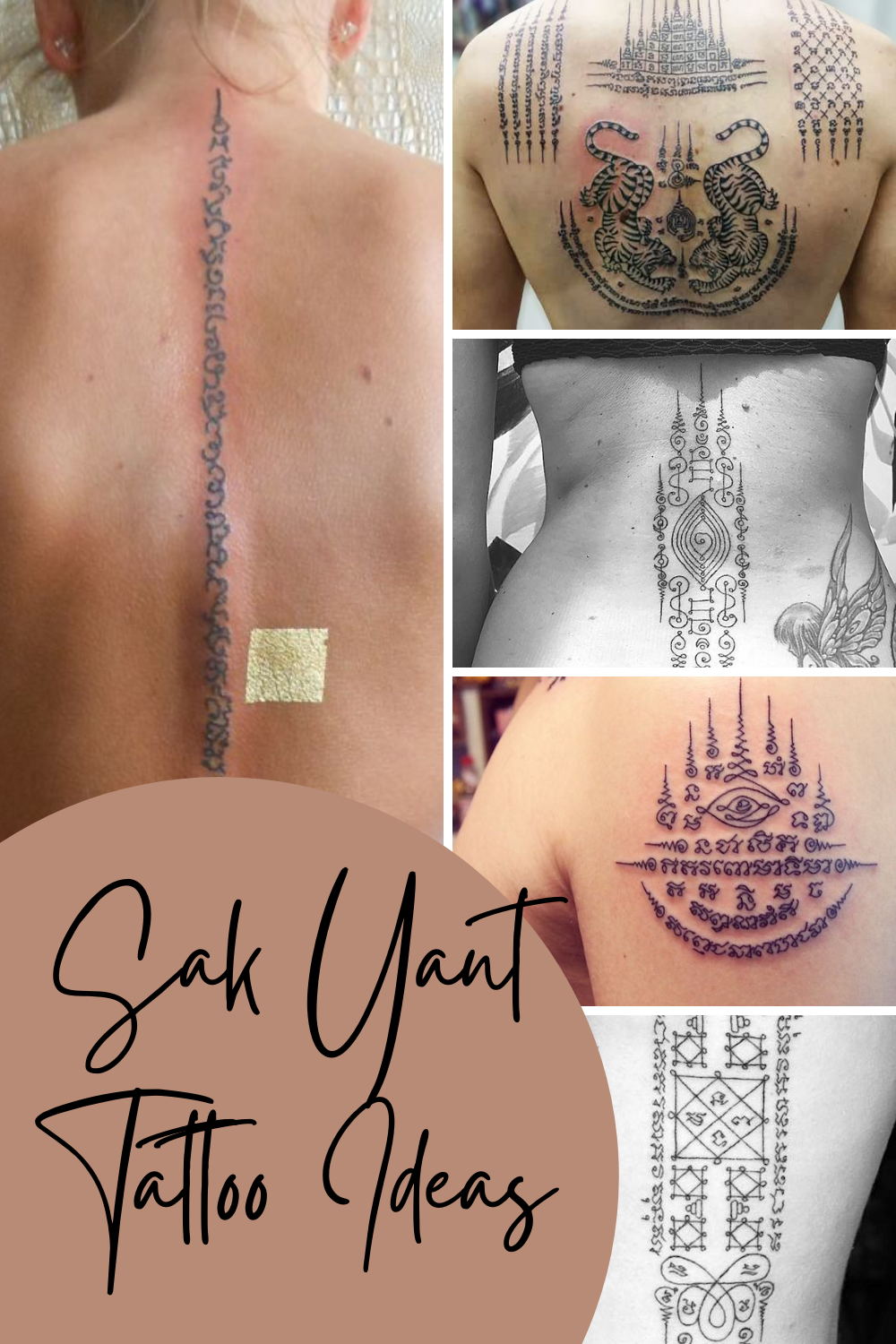 3. Middle of the Back Idea

The Meaning Behind the Sak Yant Tattoo

The Sak Yant tattoos, also called the yantra tattoos, are believed to have mystical powers. Since they originated from a religious concept, followers of the religion believe the tattoo is magical and provides protection and good luck to the person who gets the tattoo (basically, it keeps the symbols close to them). Because of this belief, this tattoo is commonly used by people in dangerous professions like military police and firefighters. The Sak Yant designs are not only famous for tattoos but are also applied in other things as well – for example, you can see these symbols being used in the media, printed on clothes, and even framed and kept inside shops for protection and good luck.

Most people believe that the power of this sacred tattoo is reduced over time – therefore, most believers re-empower their tattoo each year by celebrating the “Wai Khru” ritual with the Sak Yan masters. Moreover, the most impressive thing is that it is a real Sak Yant template and then modified by changing the spell and, in turn, the meaning of the tattoo to suit an individual’s needs and wishes.

However, despite being known for its mythical powers and ability to bring good luck and protection around Thailand, it has attracted the attention of the West after celebrities showed interest in it. Nonetheless, foreigners have fallen in love with the intricacy of the design, the symmetrical shapes, and how cool it looks on everyone.

What Is It’s History?

As we said earlier, the Sak Yant tattoos have existed for over 2000 years and are forever known as a symbol of protection, prosperity, and good luck. It might be native to Thailand, but the belief in the Sak Yant tattoo and its powers are well known throughout Southeast Asia – as far as the Philippines and Indonesia. And that’s how, over centuries, the tradition of the tattoo reached other parts of south Asia, including Thailand, Colombia, and Myanmar.

Hence, it can be said that the culture of Sak Yant originates with tribal animism; it got closely linked to the Hindu-Buddhism concept, which includes mystical geometric patterns – also known as the concept of “yantra” in their meditation. Buddhism in Thailand – also known as “Tanktric Theravada,” soon got linked to ritualistic and magical tantric practices that enlighten people and use mantras, symbolism, and worship.

There are many designs of the Sak Yant tattoos – here are some of the common ones:

The Suk Yant tattoo is surely a very interesting tattoo design that is not only cool and looks attractive, but is also a great representation of Buddhist culture. Buddhism has been in the world for a very long time but was not known by people in faraway lands. However, now, over the years, people have become more and more curious to know about the meaning and the history of this tattoo, and this has contributed to its popularity. If you are also curious about the tattoo design, we are sure the information above will help you understand the true meaning behind the famous Sak Yant tattoo.