Inside: Aztec Art Tattoo Definition & history of it.

Aztec tattoos were first worn by the ancient Aztec people who inhabited parts of Central America and Mexico. Their tattoos were applied as a part of rituals, meant to honor a chosen god.
The art on their bodies was also used to differentiate between tribes and display a warrior’s prowess. 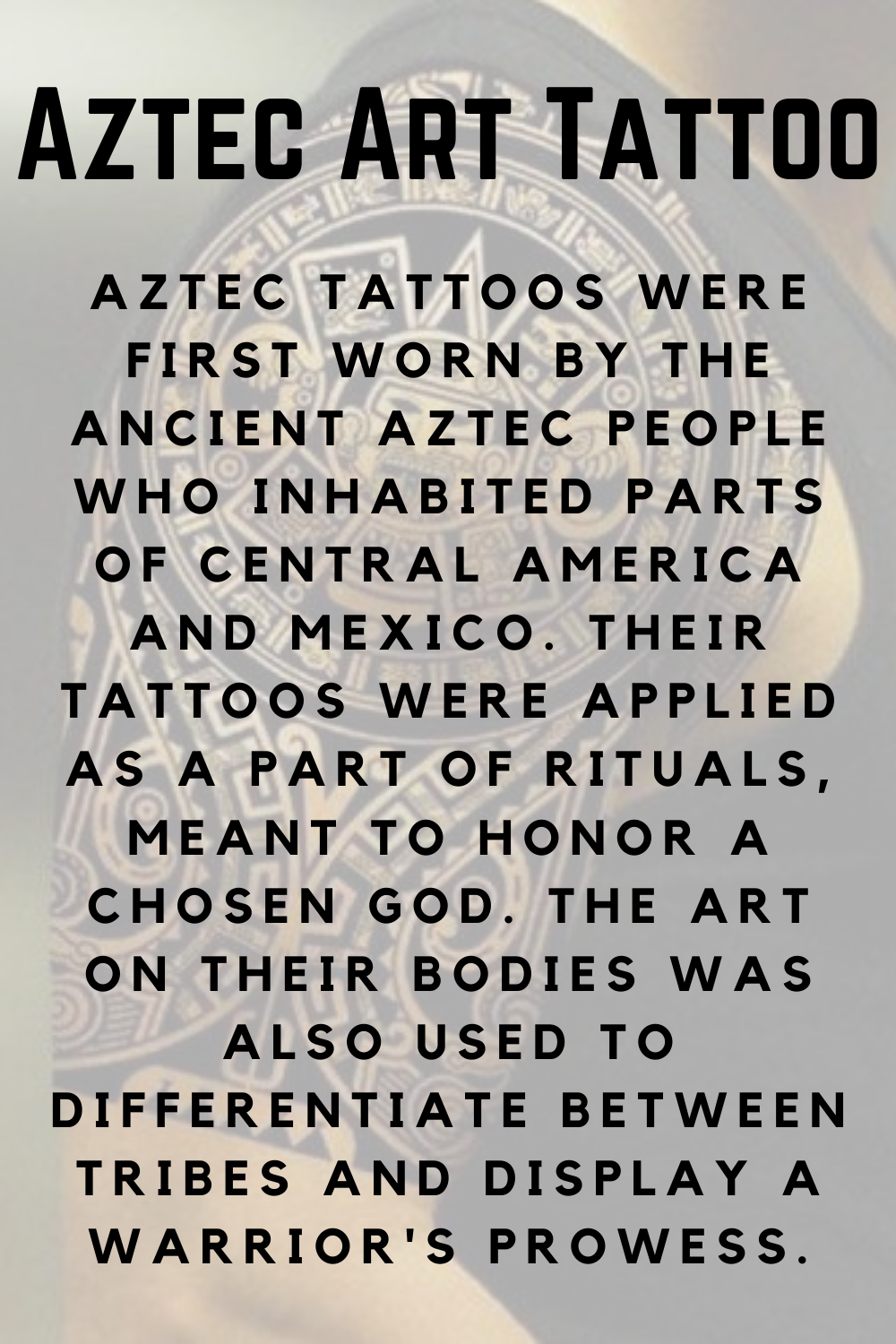 Aztec art tattoos, mostly done in gray and black ink, are tribal tattoos that have a ferocity about them with their elaborate lines and even 3D effects. They have a powerful look that’s rugged and typically manly, aesthetic anywhere on the body.

These tattoos were first worn by the ancient Aztec people who lived in parts of Mexico and Central America. Their tattoos were applied as a part of rituals meant to honor a particular god. The art of their bodies was also used to distinguish between tribes and highlight a warrior process.

Aztec art tattoos come with some ancient knowledge, such as a faint whisper from an elderly Aztec woman narrating stories from the past. Given their rich history, Aztec art tattoos are extremely popular today.

In this article, we will look at Aztec art tattoos and the meaning behind them.

What Is an Aztec Art Tattoo?

Aztec art tattoos were used to designate a bodily representation of belonging to a particular tribe. In addition, every kind of tattoo designated the person’s warrior status. This way, everyone could know how strong and powerful they were.

As we discussed earlier, Aztec art tattoos are primarily in gray or black and usually have some kind of a tribal pattern. This can include a woman’s face, a warrior’s face, or a skeleton. Such figures often wore a headdress, which symbolized high status to the Aztecs.

What Is the History of Aztec Art Tattoos?

Aztec art tattoos were worn by Aztecs living in areas of Mexico and Central America. They applied tattoos as part of rituals intended to honor the civilization’s god.

From 1200 AD to 1521 AD, the Aztecs created a sprawling empire that thrived in the valley of Mexico. Their city went into ruins after the Spanish conquest; however, some elements of their culture remained.

These days, both admirers and descendants of Mesoamerican culture pay tribute to the Aztecs in the form of tattoos. Individuals from across the globe like the style because of what these tattoos represent, and the ancient artwork of the Aztecs is incredibly beautiful.

Where to Get an Aztec Art Tattoo?

There are plenty of places where you can get an Aztec art tattoo. These include:

Types of Aztec Art Tattoo and Their Meaning

Here is an in-depth walkthrough of the different types of Aztec art tattoos and the meaning behind them.

Other Tattoo Ideas You Should Check Out

In Aztec culture, there are several gods to worship, and in the contemporary era, there’s a plethora of high-end tattooing equipment to fire up our imagination.

In Aztec culture, there are several gods to worship, and in the contemporary era, there’s a plethora of high-end tattooing equipment to fire up our imagination. At Tattoo Glee, we offer a number of Aztec-inspired tattoo ideas through which you can pay tribute to Aztec culture! Get in touch with us to learn more about these tattoos and the various designs you can get.