Home » Dictionary » What Is A Body Suit Tattoo? Do You Have One?
Dictionary, Tattoo Sleeve Ideas

Inside: A body suit, also known as a full-body suit, is a type of tattoo that covers the whole body, or at least the whole torso.

When creating a body suit, hands, neck, face, and feet are usually left without tattoos. 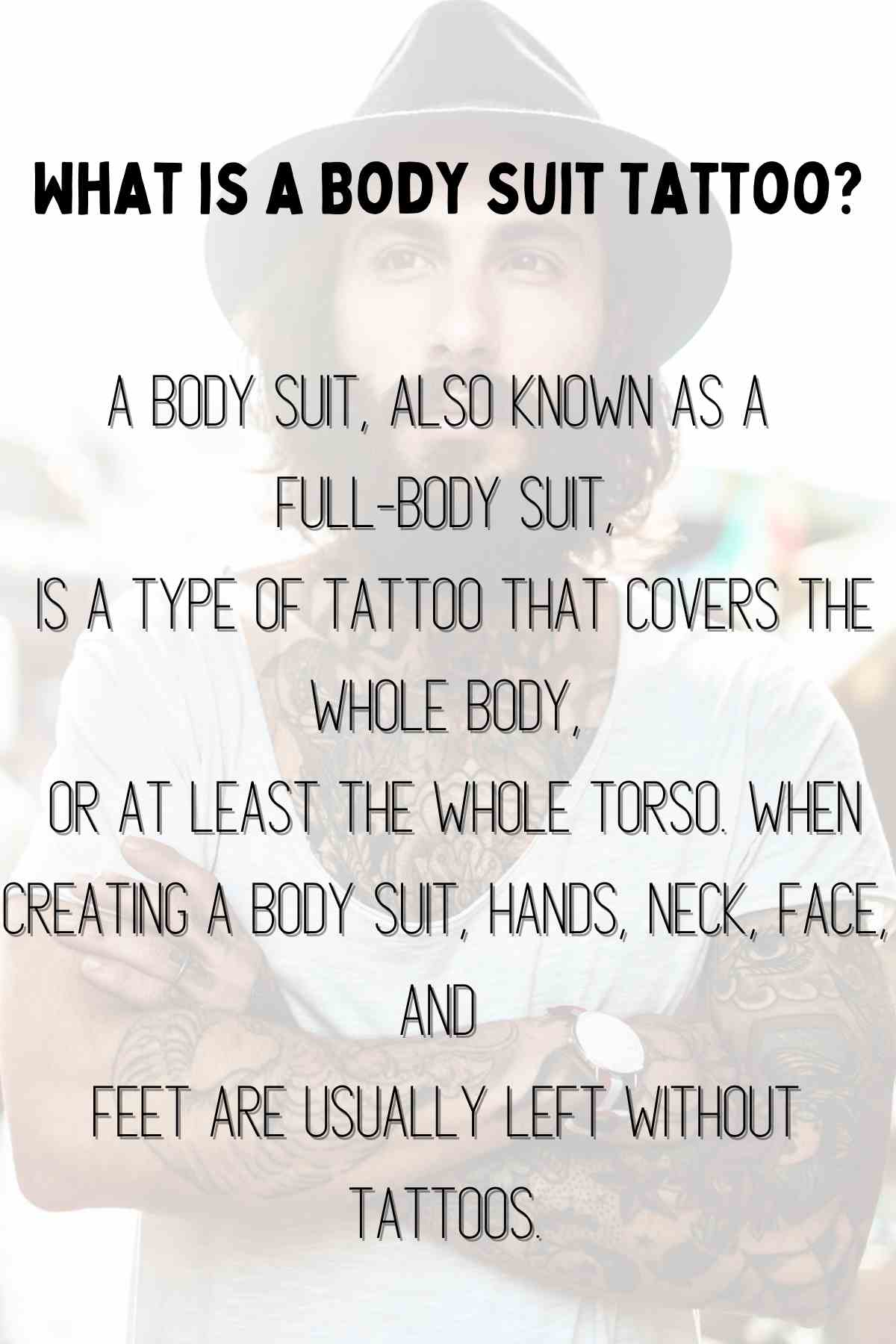 Most commonly, a body suit will follow the same pattern, theme, or style all over the body. In some cases, the whole suit is a single picture.

Why Do People Get Body Suits?

Today, most people get body suits to display their total dedication to the craft. Getting a body suit showcases a tremendous deal of willpower and resilience, and it turns the tattooed person into a living, breathing piece of art.

In Japan, where these tattoos became truly popular for the first time, they were used to display one’s wealth. Later on, they became associated with the yakuza, after they had been outlawed.

History Of These Tattoos

Body suits first appeared around 1500 BC, and they were developed by Pre-Austronesians in coastal South China and Taiwan, before they went on to spread all over the Indo-Pacific. Some Native American tribes also used them.

However, these tattoos got a mainstream appeal in 17th-century Japan, that is, in the Edo period. This style of tattooing was referred to as irezumi, and it was a way for middle-class people to display their wealth.

Since there were laws prohibiting anyone but the ruling class from wearing fine clothes, this was the only way for them to showcase their wealth.

By the end of the Edo period, these tattoos were outlawed to improve Japan’s image in western countries. This made the tattoos underground, so they were adopted by the yakuza.

The yakuza would tattoo their entire bodies, including genitalia, except the neck, face, and hands. Their tattoos were done by hand, that is, without using any machines.

Body suits spread to the West in the 20th century, where they were adopted by musicians, bikers, and tattoo enthusiasts in general.

People with body suits in western countries are usually an object of curiosity mixed with awe, respect, and occasional aversion. Some people, like Isobel Varley became famous on account of their body suits. She was officially the world’s most tattooed senior woman.

Their most common wearers are, however, musicians and athletes, such as:

There have also been some recognizable performers famous for their body suits, such as:

The most recognizable type of body suit tattoo is the traditional Japanese irezumi style. This type of tattoo is made by hand by a tattoo master called a horishi. The whole process is painful and very time-consuming, but the results are typically phenomenal.

The artist uses wooden handles and special needles connected by a silk thread. A special type of ink, called the nara ink, is used. Very few people are able to produce this type of tattoo, and their training usually takes a very long time.

This is not the only way to create a body suit. Any type of tattoo can be suitable, so it’s not uncommon to see someone sporting a body suit of traditional American tattoos or complex geometric patterns. 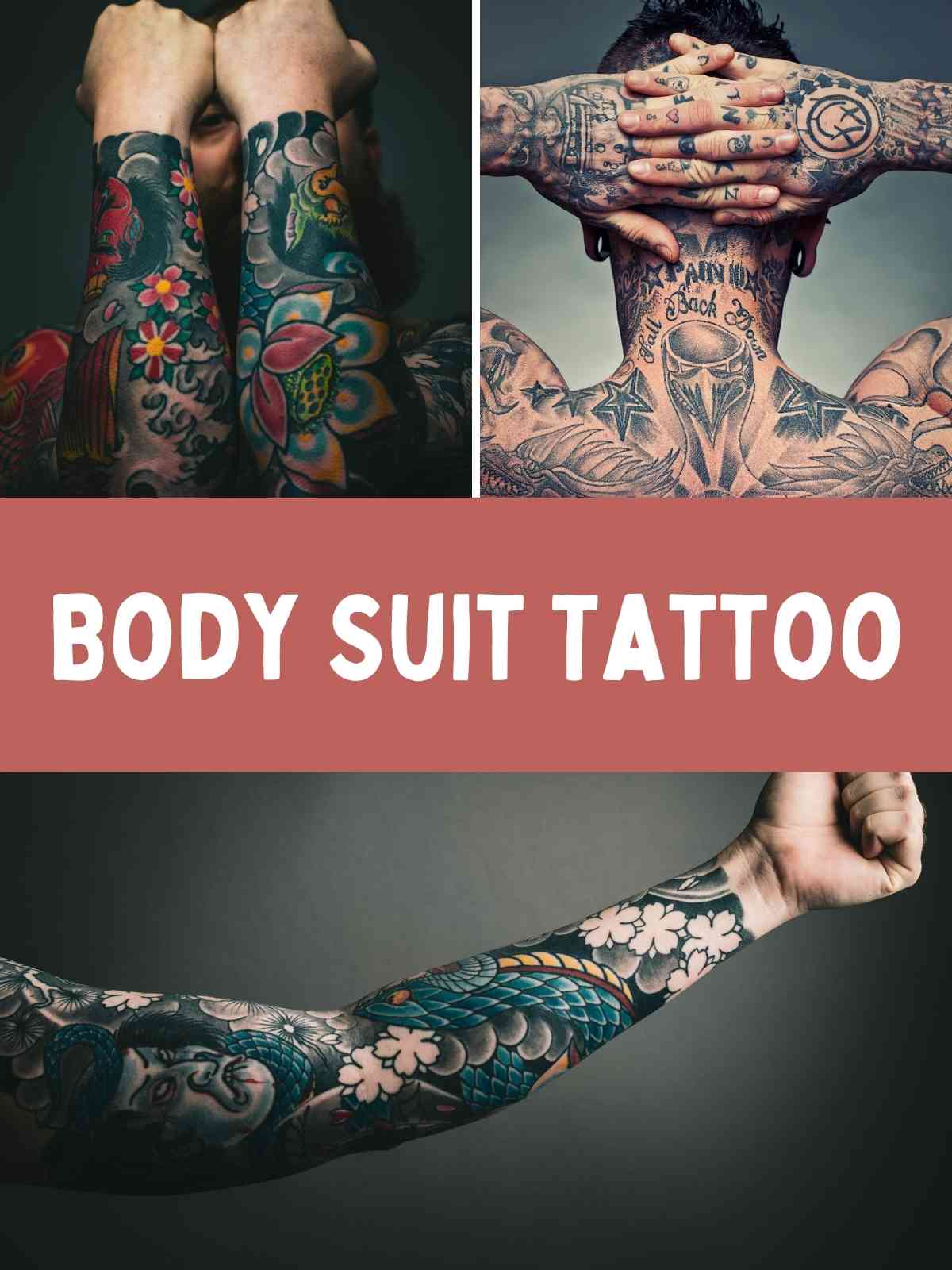 Why Not Just Get A Tattoo Sleeve?

Unlike a body suit, a tattoo sleeve covers only one or both arms. It comes in three variations:

It takes multiple sessions and a lot of patience and resilience to get a perfect tattoo sleeve.

A tattoo sleeve can also cover a leg, or one can have a sleeve on each leg. In some cases, people start by working on a sleeve, and it slowly grows into a full body suit.