Is it a cry for help? Or a symbol of change? Does it represent you as a prisoner? Or does it showcase your commitment to prayer? The popular San Judas tattoo has been known to exhibit a multitude of meanings for those who flaunt it.

So, what is it that makes the tattoo so popular? The answer is simple. It is the ignorance of the apostle’s actual history in favor of misinformation and false beliefs surrounding it. For most people in the contemporary world, Judas does not represent the apostle Judas Thaddeus but Iscariot, the man known to have betrayed Jesus Christ.

Unfortunately, the nature of the tattoo’s popularity has little to do with the apostle’s real history and much more with inattention.

Nonetheless, here are some of the most compelling meanings behind the famous San Judas tattoo. 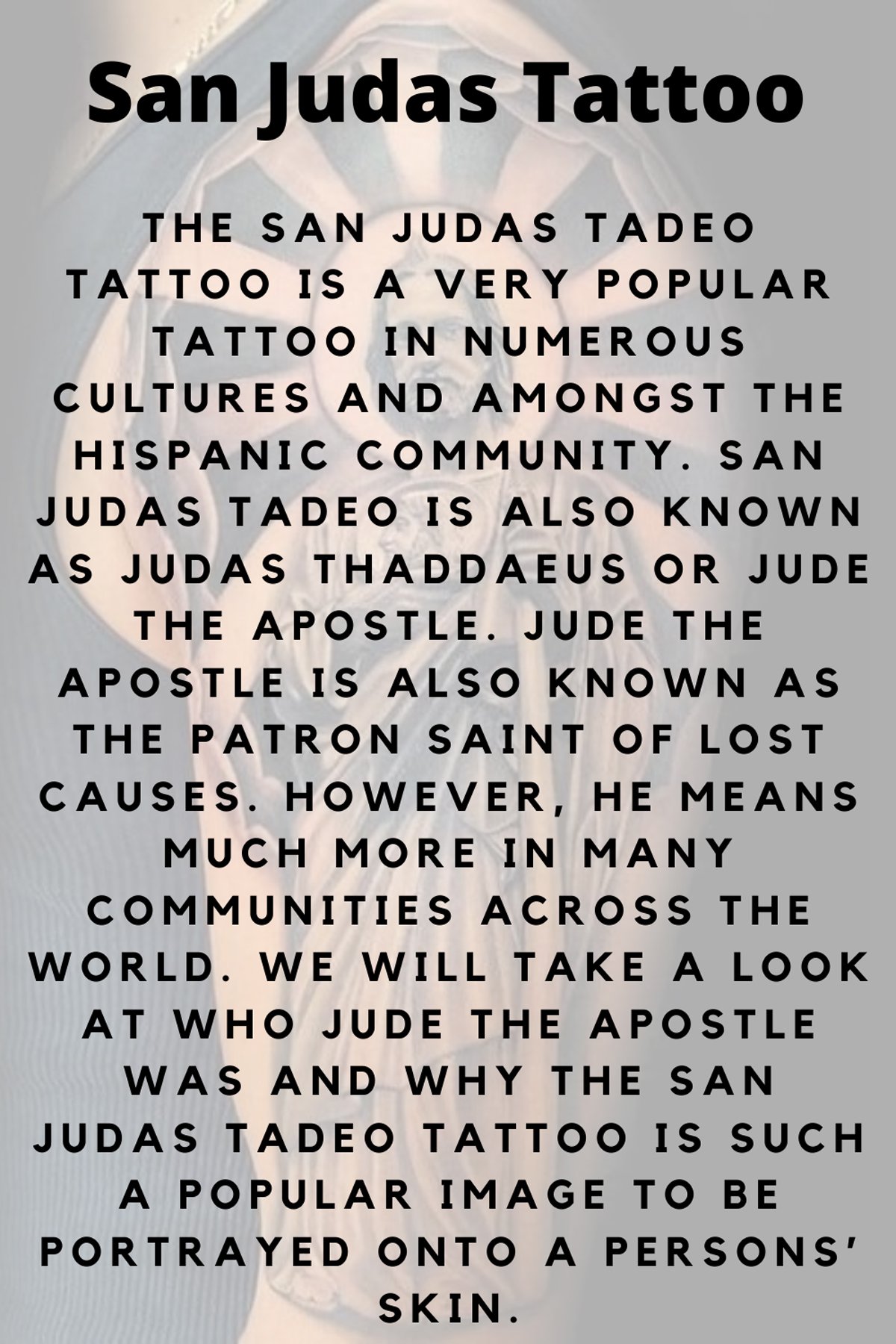 Who Was San Judas?

Jude Thaddeus, one of the twelve original apostles of Jesus, was the embodiment of perseverance for many. The man who stood by his faith and ultimately paid the price for it is one of the most highly regarded figures in the world.

Not much had gone right for the apostle since he was a child. Known as the patron saint of lost causes, his story still resonates with millions worldwide. Saint Jude was the ultimate pillar of strength for all those suffering and waiting for God’s mercy on them. He often constantly reminded those hunted for their faith to hold on a little longer because God’s protection was nearer than ever.

The Saint of Lost Causes – Symbolism

Unlike most other tattoos, this one requires you to be a lot more responsible. Not only was he a religious figure, but he was also someone that people of the time highly respected and looked up to. He was the remedy to their pain and the healing to their suffering.

Hence, most people wear this symbol in times of desperation or suffering, especially if they haven’t experienced any relief from their pain. On the other hand, it also represents imprisonment, but not always in the literal sense. You can be a prisoner of your own mind or hopelessness that has manifested into your life. Floating through some of the most difficult situations in life, people often opt to wear this tattoo and make their suffering public.

At the same time, it also shows one’s willingness to be patient, just like Jude Thaddeus. It also displays their strength and ability to fight through certain battles of life. With thousands of people struggling to merely survive, it is no wonder that most of them choose to turn to any possible help they can get.

In fact, for many, Saint Judas Thaddeus may be the last ray of hope. 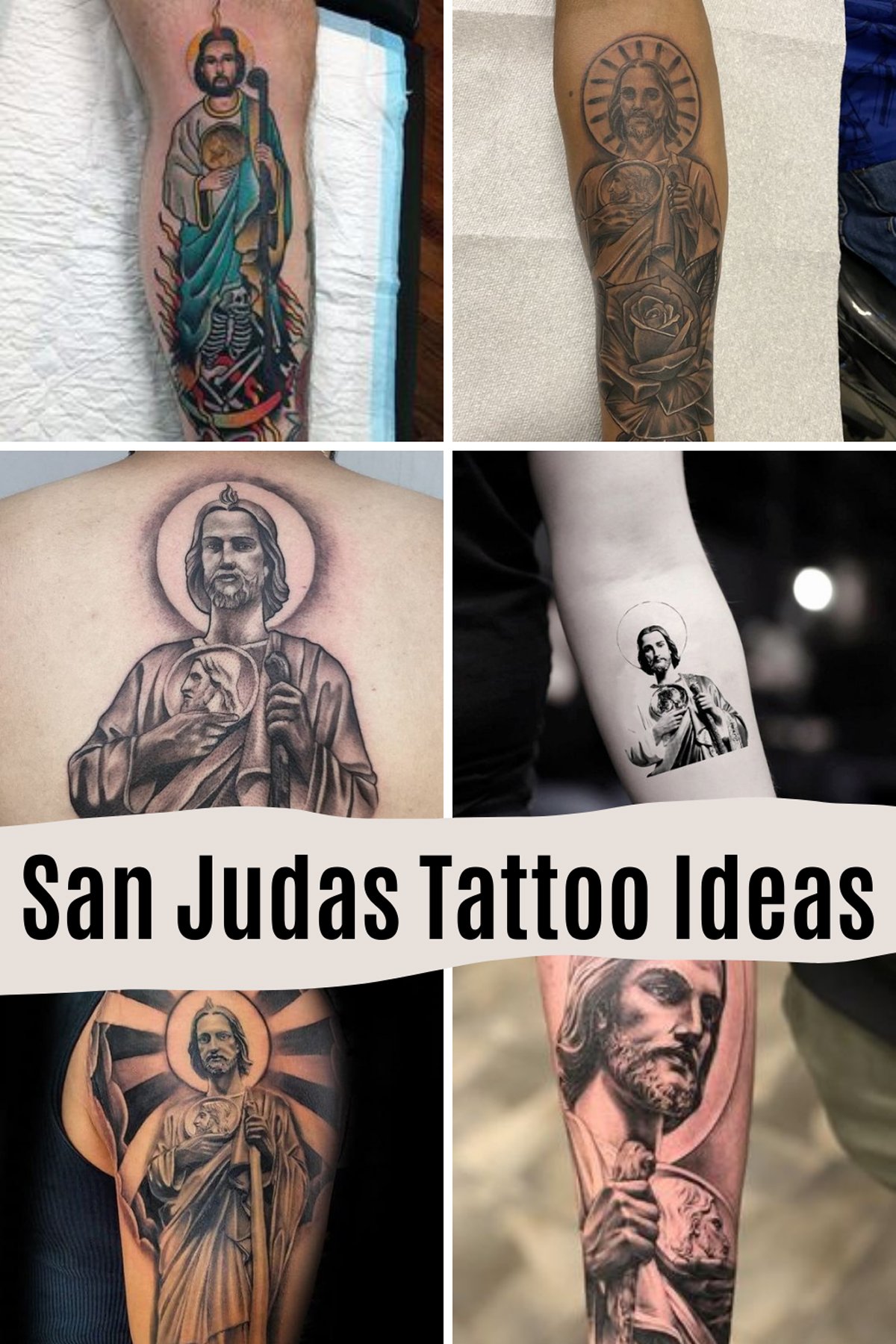 6. San Judas Tattoo on Back

Nonetheless, just like him, his influence has also persisted and stood the test of time. People still invoke his name in times of distress or need. While many meanings are associated with the tattoo, the most common themes have to do with pain, suffering, perseverance, and strength.

While there’s still a general disagreement between modern Protestants and adherents of the Catholic Church about his true identity, much is still unknown about the apostle. Hence, people prefer to attach their own theories to the tattoo and its meaning.

Some believe that he died as a martyr while others claim that he was beheaded or executed by the sword. This is also one of the primary reasons you often come across portraits showing him with an ax. Interestingly enough, his remains have traveled all the way from Egypt, where he was buried over 2000 years ago, to St. Peter’s Basilica, where they now rest permanently.

Many people also believe that he was originally buried with Simon the Zealot, another of the twelve apostles, but little is known about the fact. Then, there are also those who claim that the reason San Judas came to be known as the Patron Saint of Lost Causes is that his spirit still lurks around and can be found at home in any event

In the end, many theories, beliefs, and values are associated with the famous San Judas tattoo. The tattoo serves as one of the best and most sought-after choices for those looking for something with spiritual significance.

Looking back at its history, it’s safe to conclude that the famous San Judas tattoo is a timeless symbol of resilience and faith. It represents a much deeper meaning and allows the bearer of the tattoo to show the world a different facet of their personality.

Is there a part of you that also yearns to show the world this side of your story? There’s absolutely no better time than now to explore new ideas and dare to be different.