Dental barrier film has several uses in various places. While it was initially intended to be used in dental clinics to keep high-touch surfaces clean, it is now used in places besides dental clinics, such as tattoo parlors.

Just like dental clinics, tattoo parlors are spaces where there are plenty of tools that come in contact with the customer’s bodily fluids and skin. To make sure that high touch areas are kept disinfected and sanitary, tattoo parlors often use disposable barrier film on all high touch surfaces.

In this article, we will take a closer look at barrier film and why it’s used.

What Is a Barrier Film?

The barrier film is used for covering items likely to become contaminated during a medical procedure, piercing, or tattoo application. It is made with a plastic film, very much like the plastic wrap used in the food industry.

There are two different sides to a barrier film. The outer surface is a shiny surface which repels fluids, whereas the inner side includes an adhesive with low residue. Even though barrier film sheets adhere to the surfaces, the adhesive is not going to leave permanent marks on the surface on which it is used. If there is some adhesive residue, you can use water, and soap can remove it.

Keep in mind these sheets can only be used once and are not meant to stay stuck permanently. 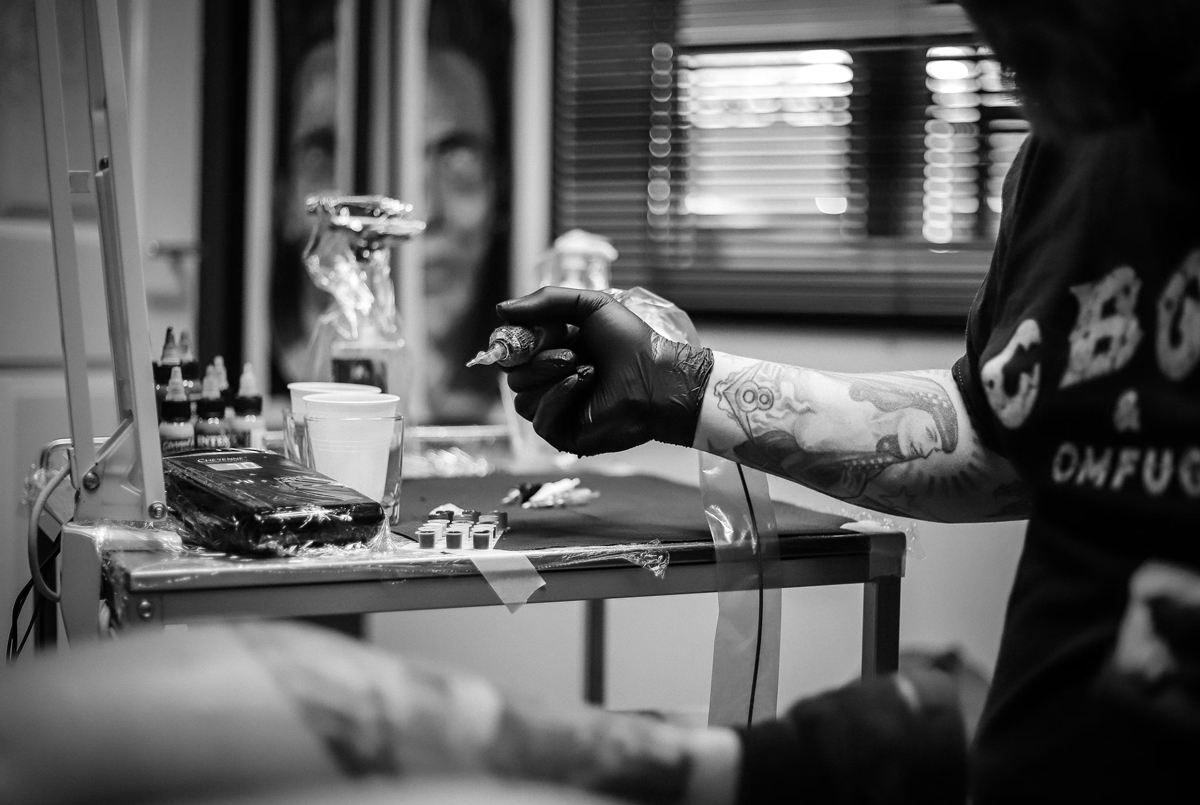 Why Tattoo Artists Use Barrier Film

Tattoo parlors have several hard surfaces that are exposed to customers. Thus, tattoo artists use this film to cover common surfaces and tools, including the tattoo chair, tattoo gun handles, trays, ultrasonic tanks, armrest, tattooing area, tattoo utensils, lights, and other equipment to keep them clean and sterile during the tattoo application process.

Since the barrier film sheets measure only 13 by 18 inches, they can be used for a vast range of services to offer high levels of protection against germs.

How to Use Barrier Film in Tattoo Parlors

Start by removing the barrier film from the packaging material and ensure the shiny surface faces out. Put the protector between two different surfaces to develop a seal. For instance, place the barrier film on any particular surface in your tattoo studio that touches the skin or is in close contact with fluids (i.e., equipment handles, countertops, etc.)

The protective layer stops cross-contamination through splashes, airborne particles, or droplets, including bacteria and dust, between customer areas along with artist stations.

Where to Purchase Barrier Film From?

You can buy barrier film from various suppliers. Even though all barrier films might seem similar, it’s important to pick a well-reputed vendor to make sure you’re getting the best possible quality. Lower cost films might appear to be the same. However, they are prone to various problems, such as a poor quality adhesive that will lead to poor adhesion on surfaces while also leaving residue behind on the surfaces on which it is applied.

Barrier film can take various forms. For instance, it can be strips of clear or blue film that are sticky on one side, disposable tube sleeves, plastic wrap, plastic protective caps, plastic bags, small baggies, and trash bags.

Bear in mind that you have to dispose of a barrier film after every use for peace of mind and never reuse or re-clean them as this can lead to the spread of diseases.

Should Tattoo Artists Use Other Precautions when Using Barrier Film?

According to the Center for Disease Control, all surfaces that might have come in contact with blood borne pathogens or other potentially infectious materials need to be disinfected after every exposure. Note that just because a tattoo artist wrapped up tools and surfaces doesn’t mean they don’t have to clean up properly with a hospital-grade disinfectant.

Tattoo artists need to take all precautions in using disinfectants that are needed for the tattooing and permanent makeup industry. These additional steps ensure optimum protection for the tattoo artist and their customers – an area that should never be overlooked!

Tattoo Design Ideas to Get from a Professional Tattoo Artist

Dahlia Tattoo Flower Ideas: Do you wish to bring out your feminine side? Do you want to embrace your womanhood with complete zeal and vigor? If yes, then a dahlia flower tattoo is the best pick for you. It’s a beautiful and delicate flower that you can get on your neck or on your wrist. Don’t forget to have a look at these dahlia flower tattoo ideas before your next tattoo appointment.

Water Lily Tattoo: Do you want to get a tattoo that’s not only pretty but also has some meaning behind it? Have you recently solved a major problem? A lily water tattoo can be the ideal pick for you as it symbolizes rebirth and life. Check out the water lily tattoo designs for some amazing inspiration.

To conclude, keep in mind that it’s imperative to go to a professional tattoo artist who uses all the right precautions, such as using a barrier film. If you wish to get a tattoo, always go to a licensed tattoo parlour and have a look at their working conditions. Make sure that they’re following safety protocols before you agree to get a tattoo from them.

If you want to learn more about getting a tattoo and need some inspiration, contact us at Tattoo Glee.