Of the varying different species, the Leopard is perhaps one of the most beautifully exquisite big cats on this planet. From their intense stare to the undeniable power they contain, this is an animal that is held with immense admiration by many. I mean, even their fir, with its abstract splattering of spots can be described in no other way than gorgeous.

Just this alone makes the Leopard a desirable tattoo, but did you know that beyond the physical attributes this cat also represents deeper symbolisms and meanings?

Now, it stands to be said that tattoos do not always need to have a deeper meaning.

If you just love the way a Leopard looks, then that’s more than a good enough reason to justify getting a Leopard tattoo, simple as that. With that being said though, understanding the symbolism and meanings behind what tattoo you’re getting can only stand to add to your appreciation for it.

So, let’s discuss what meanings can hide behind the Leopard! 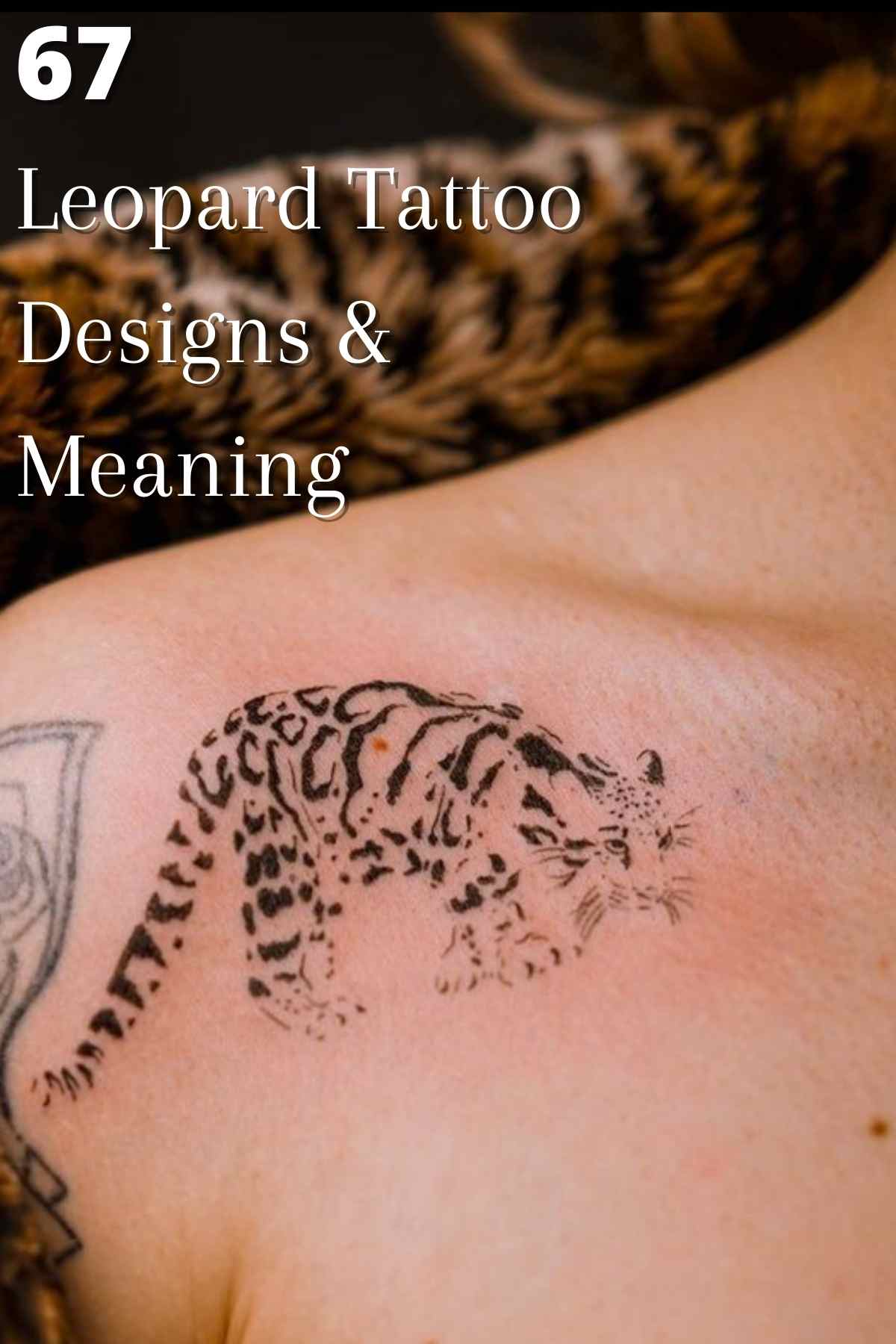 Spiritually, the Leopard is regarded as the symbol of absolute strength. Though they are actually the smallest of the Big Cats, they make up for it with their impressive strength and skill. In fact, of the Big Cat family, the Leopard is the only one known to be able to carry the deadweight of their prey and literally drag it up a tree. That is STRENGTH. You do not want to mess with a Leopard.

For similar reasons, the Leopard is also known to symbolize power and skills. When it comes to instincts nothing can beat the way that a Leopard can adapt and manipulate situations to work for their favor. Because of this, Leopards are also the symbol for cunningness and capability!

So if you’re someone who can relate to these attributes then perhaps a Leopard tattoo is meant for you!

Below we’ve pulled together some of our favorite examples of varying Leopard tattoos. From Simple to small, to detailed and realistic, the choices below will help you find the kind of tattoo that speaks to your soul!

When it comes to Leopard Tattoo Costs, many things come into play. Costs can vary from shop to shop depending on; Size, Detail, & Color.  Broadly these tattoos can truly be anywhere between $50-$1000, so talk to your tattoo artist for a better idea of what to expect. 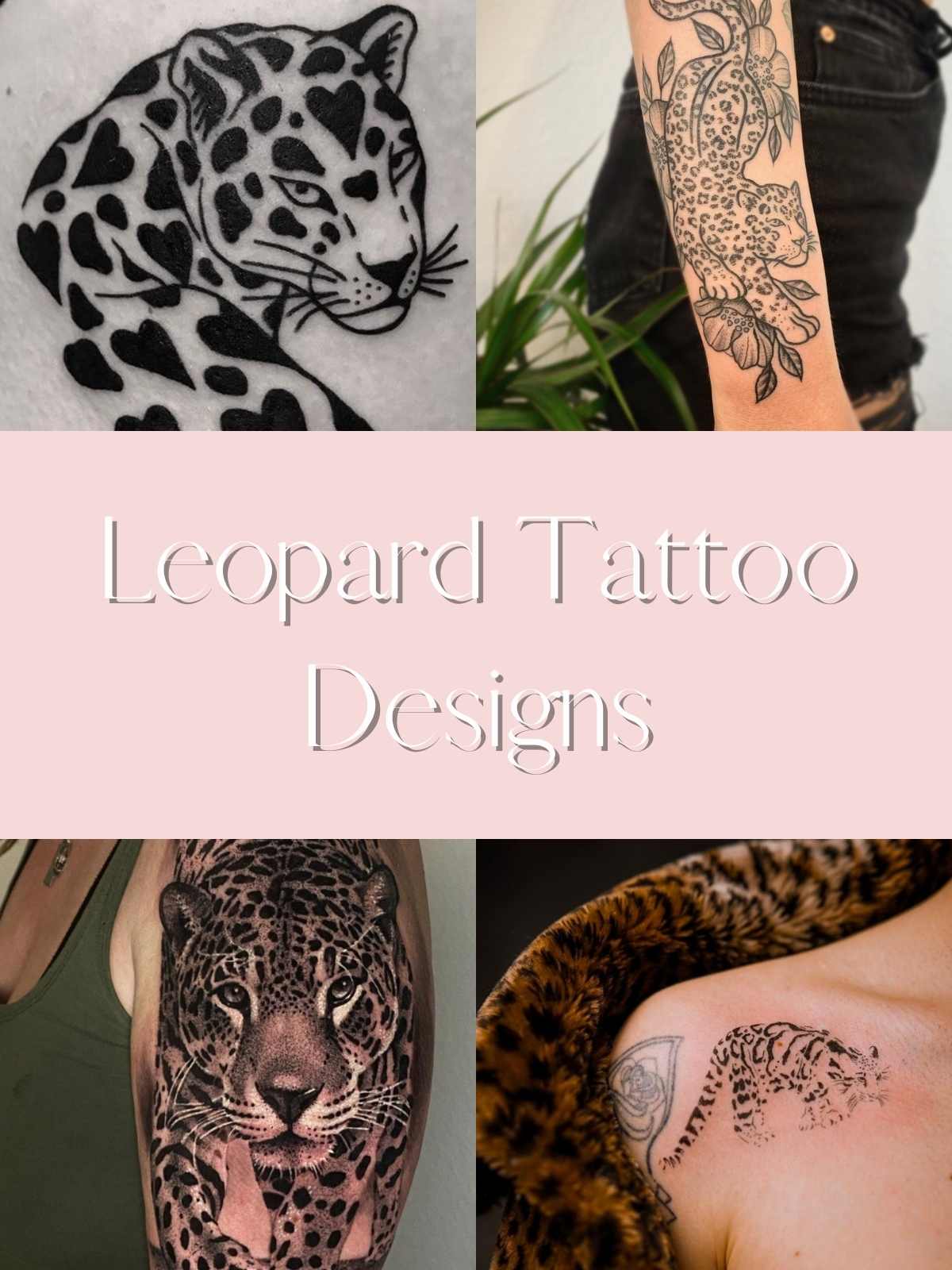 These are a mix of many different kinds of Leopard design ideas to help showcase the uniqueness you can add to your Tattoo. Whether it includes flowers, jungle leaves, color, or simply be in black and white, the pure range that you can obtain with a Leopard tattoo is unfathomable! These are some of our favorites we hope you’ll love!

5. Leopard in the Jungle

9. Black & White Leopard on the Hunt

Snow Leopards hold similar meanings as the ones mentioned above. It is said that those who choose to be sober may be drawn to this kind of tattoo as it speaks to adaptability and personal strength! How awesome is that? Below are some great examples of Snow Leopard Tattoos. 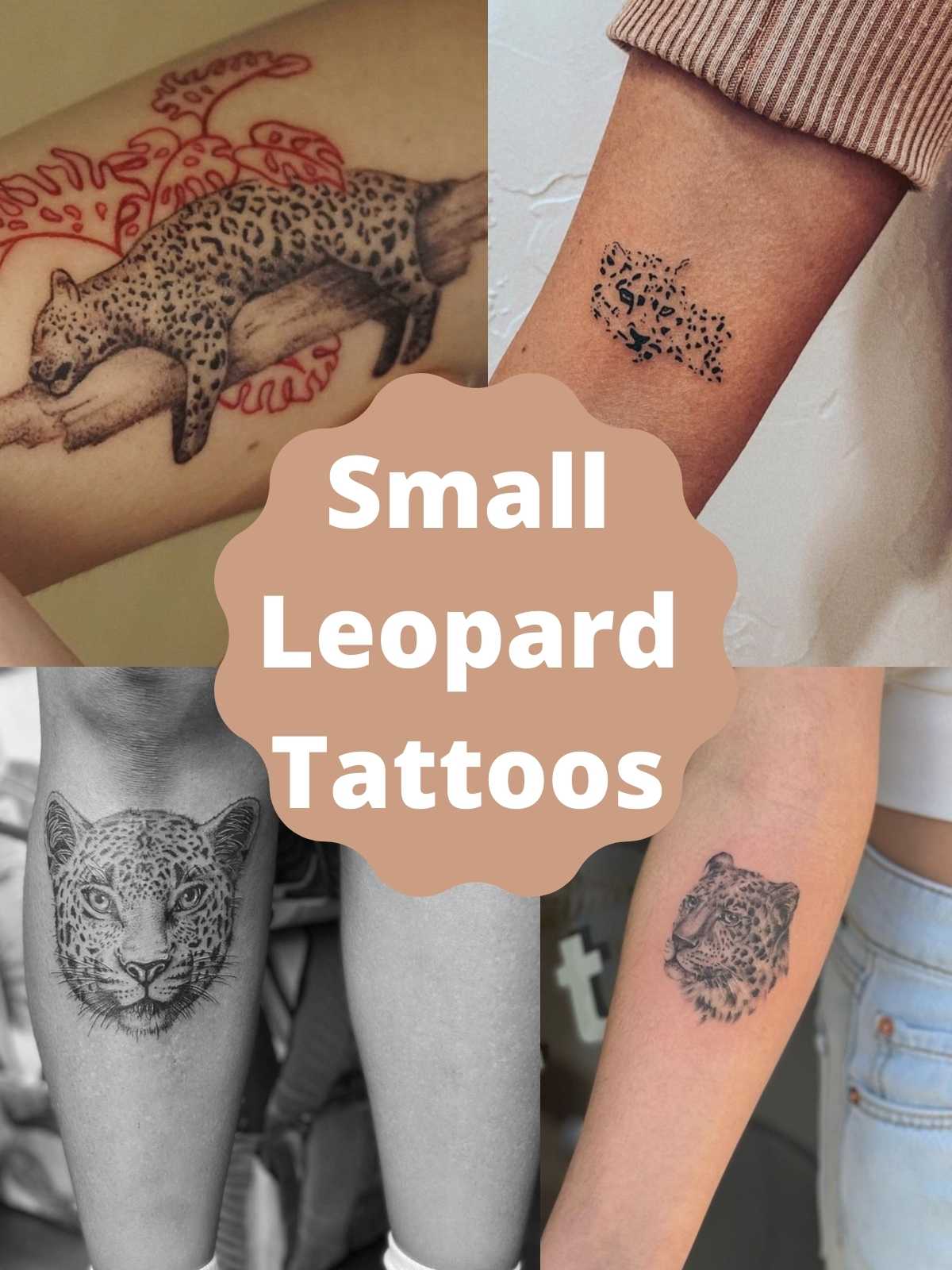 Are small tattoos more your style? Then we chose these with you in mind! The designs below are simple, small, and perfect for anyone adding to their collection!

35. Leopard with Heart Spots on Back of Neck

You don’t need to have an exact portrait of the animal in order to hold the symbolic meaning. The Leopard print itself represents them just the same. If you love the look of Leopard print by itself then take a look at the tattoos we’ve included below! 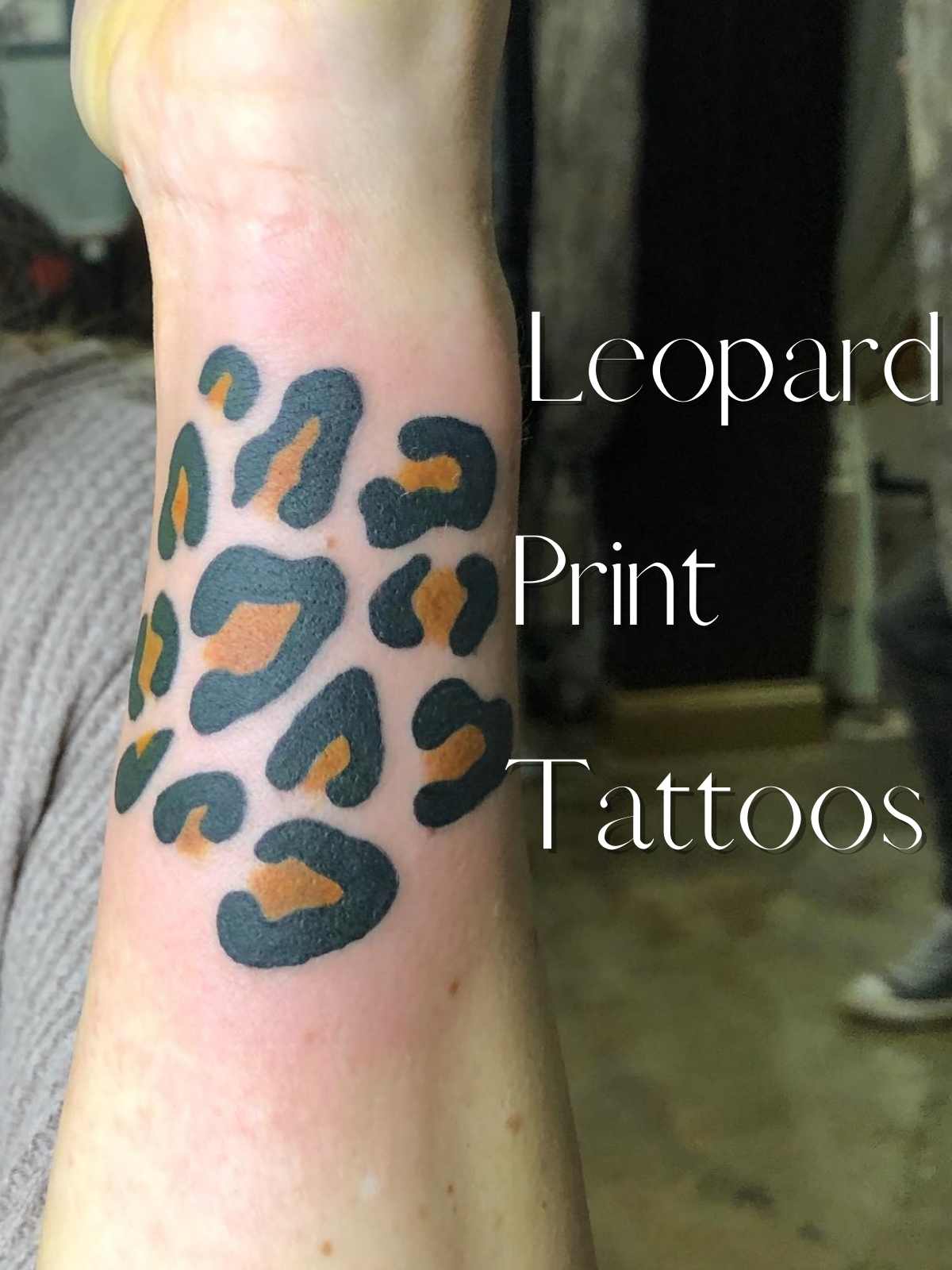 These are some great examples of Leopard face tattoos in different forms! From tattoos actually on your face, to a Leopard face itself. We’ve got you! 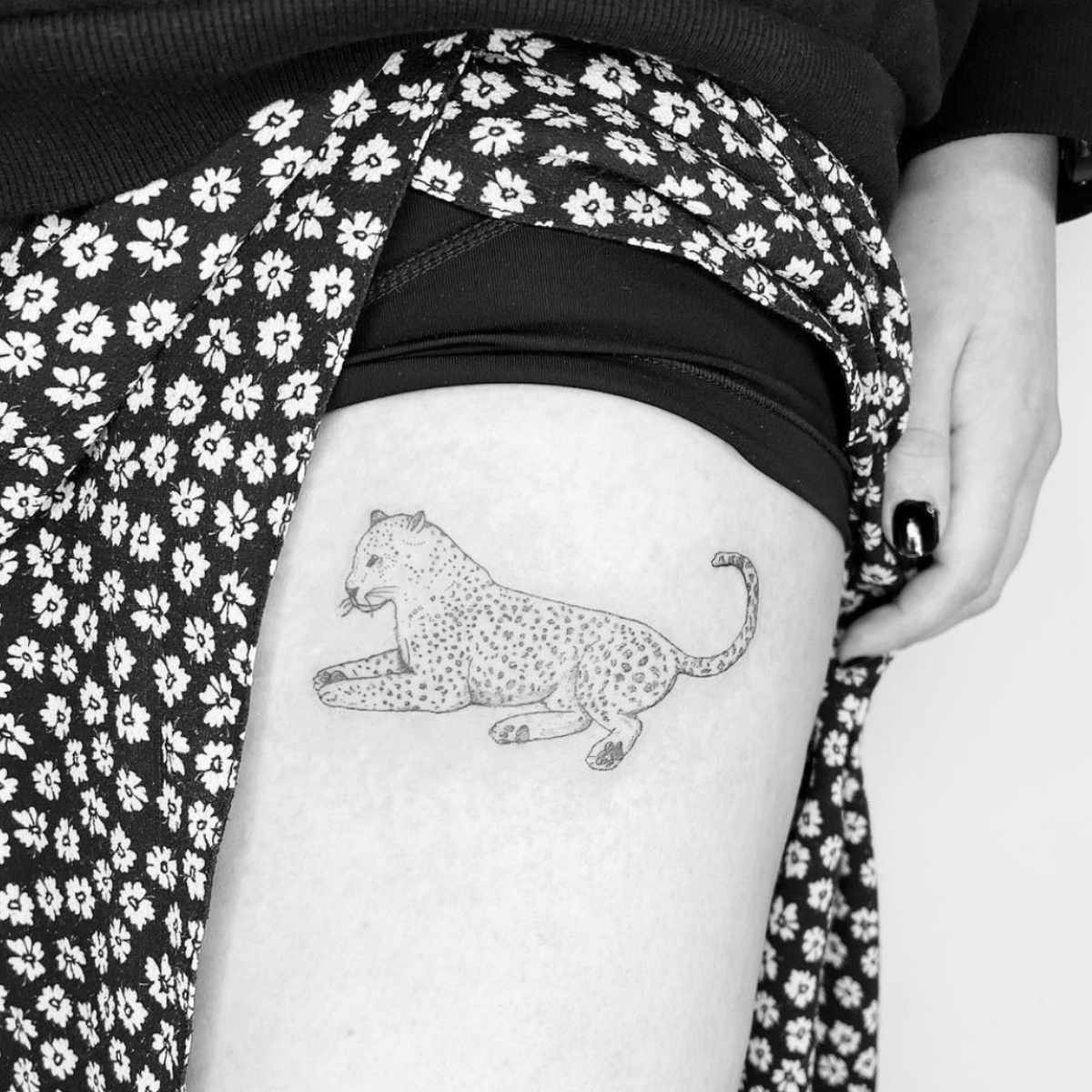 Black Leopards, more commonly known as Black Panthers, are Leopards that didn’t get the spotted fir genes and instead have a fierce black coat! Below are some examples of these beautiful creatures in ink form.

59. Black Leopard on the Hunt

We hope you loved these examples of Leopard Tattoos as well as have a better understanding of the deeper meaning behind them. Take a look at the links below to check out some more animal tattoo ideas!