Inside: Adorable donut tattoo ideas that take the cake (donut).

So, I think we can all universally agree that donuts are the best. They are sweet, portable, and have so many awesome flavor options. We even have a national donut day! And what better way to celebrate this delicious creation than with a tattoo?

Yep, that is a thing, and it is GLORIOUS. It’s basically serotonin in tattoo form. How can you look at a tattoo of a donut and not just smile? It’s impossible. So in honor of this epic circle sweet, I have created a list.

What kind of list you may be asking yourself? Well, it is a list of the cutest donut tattoo ideas from around the internet. I compiled these together for those of you who are considering getting your own donut tattoo.

You can look through these to gain some insight for your tattoo style and to get some inspiration for your new ink. 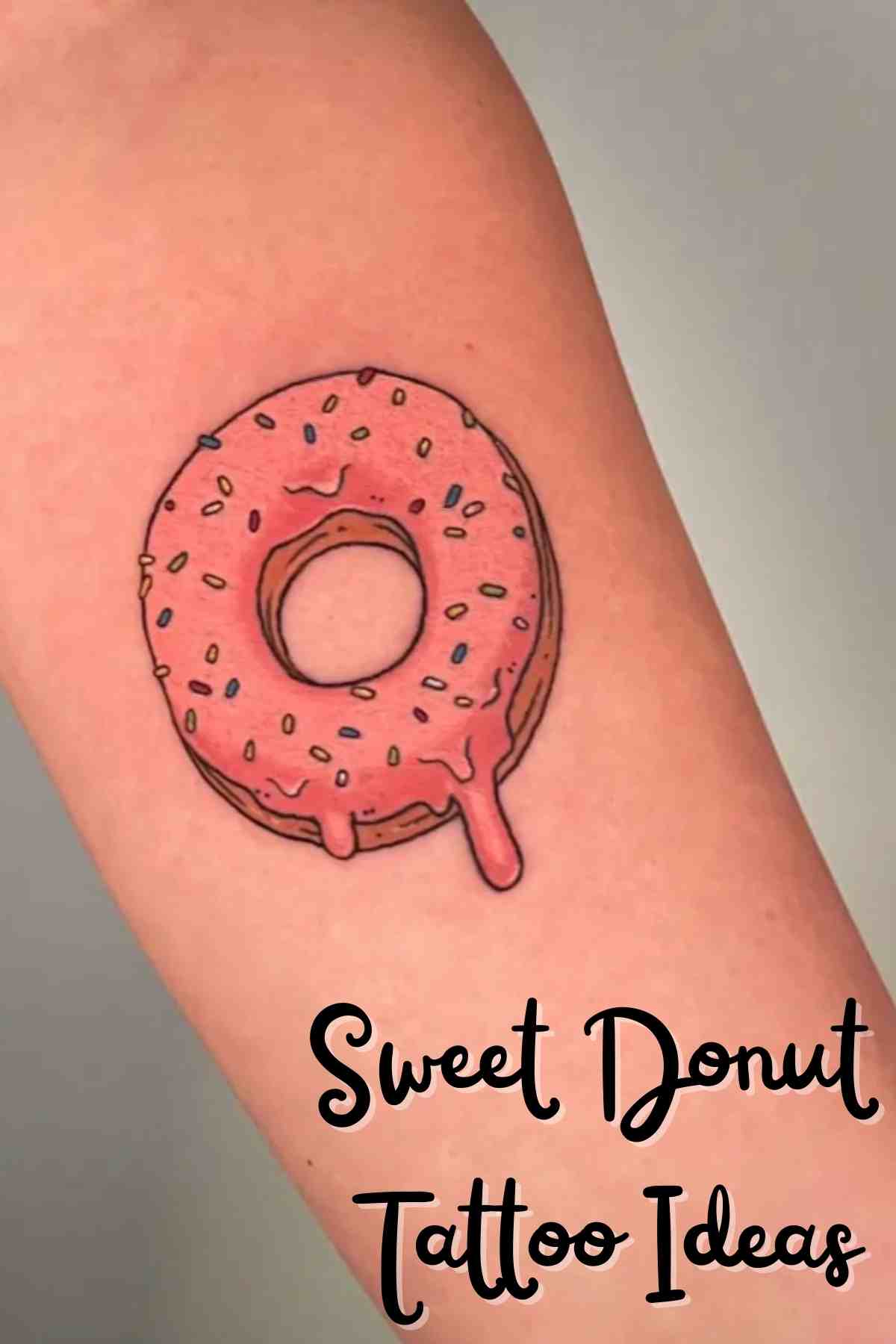 There are so many different styles and themes down below, so I know there is a donut out there for everyone. But before we can get into that, let’s discuss some of the important things!

Will a Donut Tattoo Hurt?

I love this question. You know what they say: the cuter the tattoo, the less pain you will feel. This is not actually accurate, of course, but it’s saying that the more excited about your tattoo that you are, the less you will care about the pain.

Spoiler alert, tattoos hurt. You are literally having an ink-filled needle puncture you a million times a second, so naturally, there is going to be a sting. The good news is that it is very tolerable. There are places on your body that hurt more than others, like your hands and spine, because they have more nerves near the surface.

So if you want to go for a spot that is less painful, avoid those areas. But remember that you can also get numbing creams and sprays before hand to use on the big day if the pain is going to be too much for you.

How much will a tattoo cost?

My advice is to book a consultation with your tattoo shop, the one you will be getting your ink from. Since prices can even vary based on shop-to-shop, talking to the person who will be giving you your tattoo will be the best way to get a clear idea.

Now that we have gotten those questions covered, we can get into the part that we have all been waiting for: donut tattoo ideas! Take a look through some of these designs to see which ones suit you best. Take a screenshot or bookmark this article to be able to come back to it if you find something you like. Check it out!

To start us off, I wanted to show you some simpler designs. This way, you don’t get overwhelmed too soon. There are so many ways that you can spice up your donut tattoo, but it is always good to see what you can start with.

Think of this as the canvas that you will be able to build upon if you so wish. Take a look and get the inspiration ball rolling. 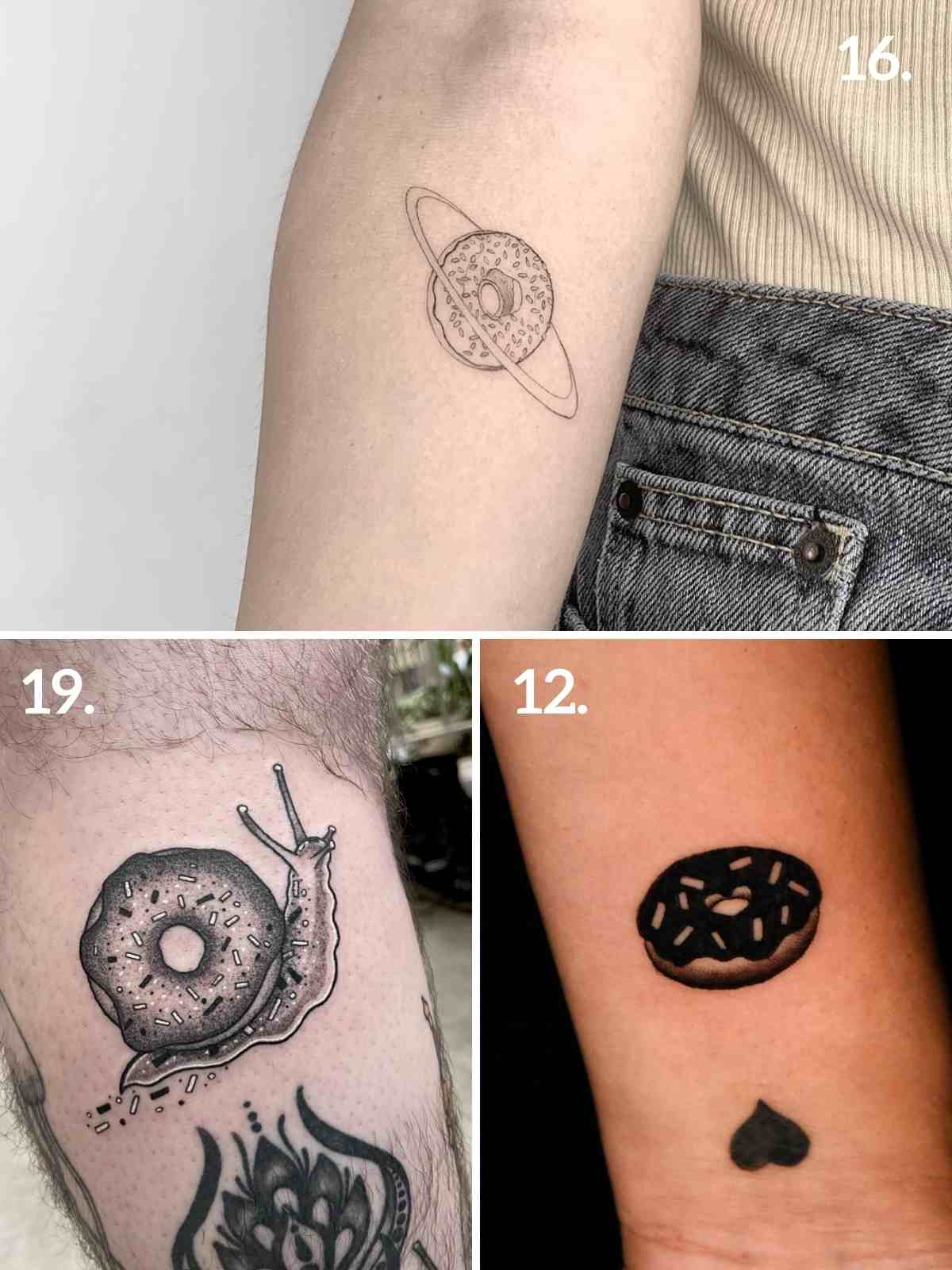 Just because donuts are normally colorful food doesn’t mean you have to get them in color. In fact, sometimes they look even cuter in black and white! See for yourself with the list below. They add some maturity to a pretty silly tattoo. Who would have that it was even a possibility with a subject as funky as a donut? But it is, so check them out!

16. Cute Donut in Black and White

For those of you who are unaware, there are many different styles of tattooing out there. One of my favorites is one that has come to light recently, which is called New School.

New School style uses a lot of bold line work and bright colors, and you will find that they are some of the cutest and sweetest tattoos ever. Take a look through this list to see if this style is for you. 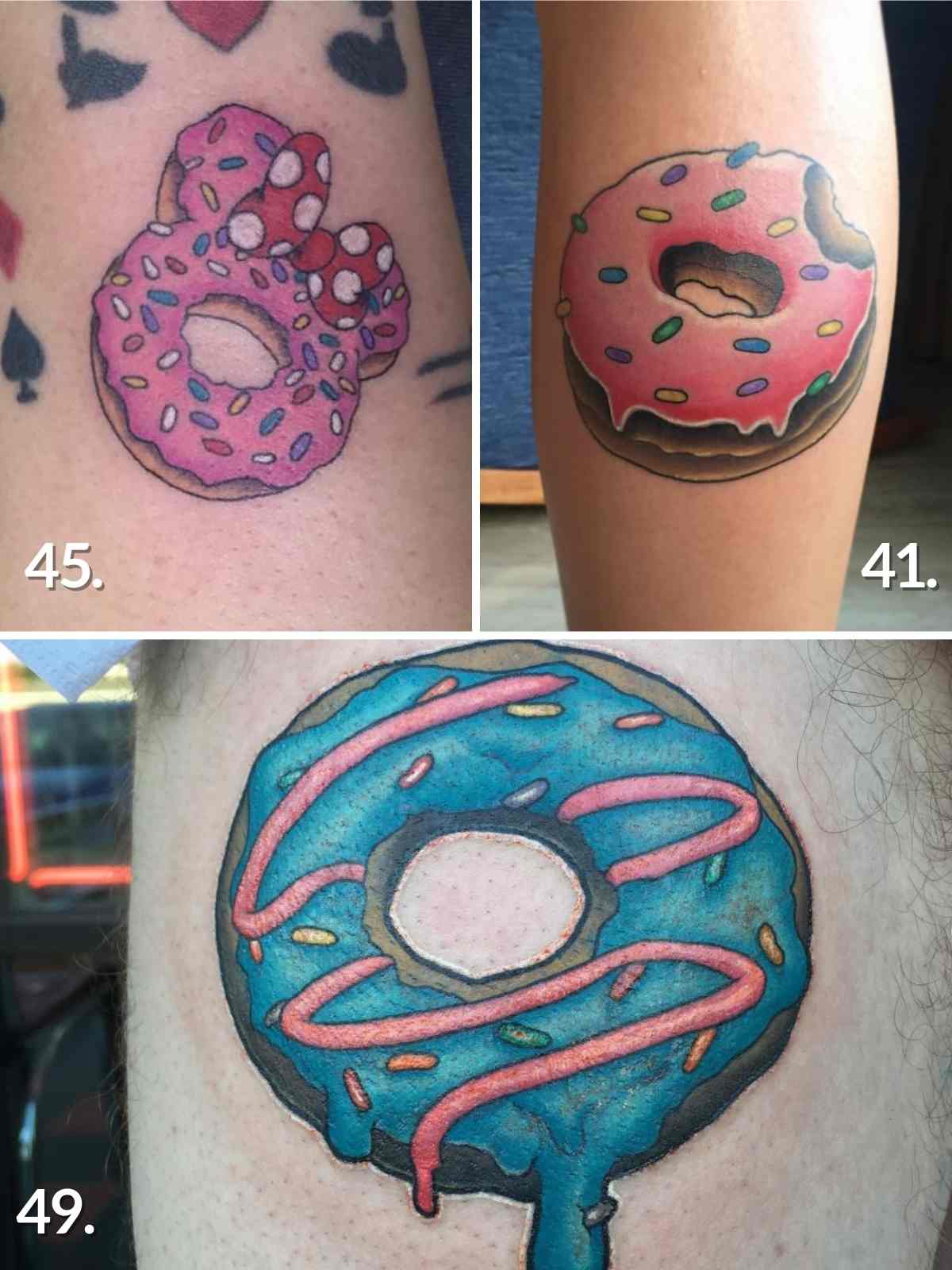 These are some of the cutest donut creations that I have ever seen. So much so that I had to give them their own section. Sure, the other donut tattoos on this list were cute, but these are unmatched.

Be prepared to have your heart swell with the adorableness of this section. Don’t worry; it’s not a medical problem…it’s a donut reaction! 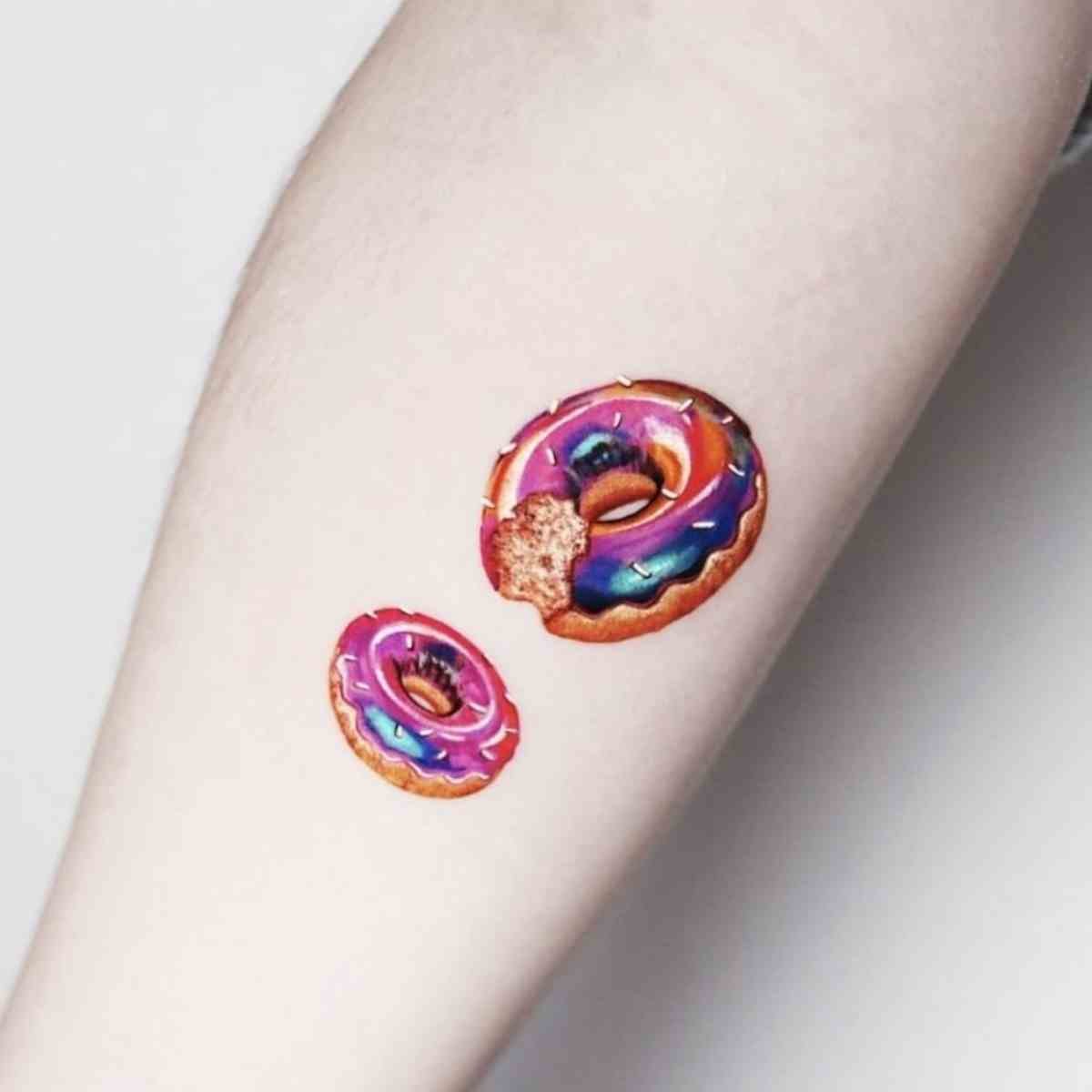 Donuts are a classic dessert that many people in the baking business have to create on a daily basis. More often than not, bakers have the ‘it’ item so to speak. This is the item that really sparked their love for creating yummy food. So if your item is the donut, then this list is perfect for you. It’s basically one big ode to this delicious round dessert.

So…did looking through this list make you hungry? Because finding all of these ideas made me crave a donut SO BADLY. Yes…I am eating one as I type this. It is sticky, but it’s worth it!

I hope that you found something that you loved throughout this article, or at the very least, you found a little inspiration for your own tattoo. I think the best part about getting new tattoo work done is the excitement that comes along with it and the happiness that follows your appointment.

There are so many other awesome food tattoo ideas out there if you like these. Watermelon is just the tip of the delicious ice burg. Think about some other kinds of foods that you might want to add to your ink collection.